80 per cent of the project cost will be towards acquiring land for the project as the farmers and land owners insisted the provision of compensation based on Land Aquisition Act.

BENGALURU: The proposed Peripheral Ring Road (PRR) project got a shot in the arm with the registration of a Special Purpose Vehicle (SPV). However, elected representatives and other agencies involved remain skeptical and feel that the PRR will remain a distant dream.
A major constraint in implementing the PRR project, they feel, is land acquisition as many farmers insist that they be provided compensation as against granting Transferable Development Rights (TDR).
On the other hand, officials at Karnataka Urban Infrastructure Development & Finance Corporation (KUIDFC) say that modalities of financing the project are yet to be finalised, as the SPV itself was formed recently.

The project was first proposed in 1995 to decongest traffic in the city. As per the plan, the eight-lane road starts at Makali in North Bengaluru and intersects Hosur Road near Hebbagodi.
Speaking to Express, Yelahanka MLA S R Vishwanath said that implementing agencies have been in a fix for the past several years. “While initial plans were to provide TDR for farmers and other land owners in exchange for their property, residents have not been receptive to the idea. They insist that they be provided compensation as per Land Acquisition Act, 2014,” he said. 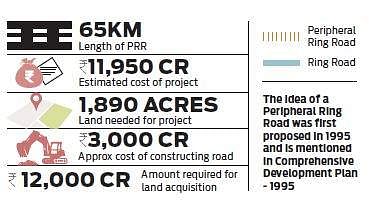 As a result, more than 80 per cent of the project cost will be towards acquiring land for the project. While it might cost approximately `3,000 crore for constructing the 65km road, over `12,000 crore will be required for land acquisition alone, he said.
The estimated cost of the project is `11,950 crore, subject to revision due to cost escalation. Around 1,890 acres will need to be acquired for the project.
While the compensation for land within 5km of Bruhat Bengaluru Mahanagara Palike (BBMP) limits is two times the guidance value, compensation for land beyond this limit is four times the guidance value, Vishwanath pointed out.

The land acquisition notification and the subsequent delay in acquiring the land has also irked farmers. According to sources, though a small portion of the required land has been acquired, farmers are waiting for the state to acquire the remaining land which it has notified.
“Due to dilly-dallying of the state, farmers and others who will lose the land along the stretch are in a fix. They are not able to develop or sell the land, while the proposed PRR has been put on the back-burner,” said an elected representative, who did not wish to be named. 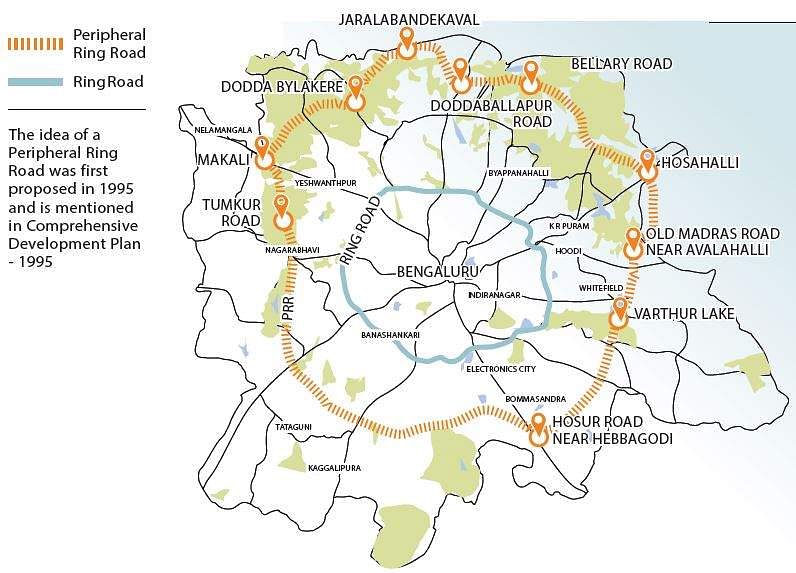 Apart from funding by state, KUIDFC has been entrusted with the task of raising funds for the project.
K M Ramesh, General Manager (Finance), KUIDFC said the
corporation was yet to receive an official communication regarding the formation of the SPV.
“The board of the SPV will decide how the project will be financed. While the state is likely to finance a part of the project, the remainder will be raised by the Corporation,” he said.
He added that the exact amount required to be raised by the corporation is yet to be finalised as several factors, including cost escalation, have to be considered before borrowing from banks and other institutions.

THE LONG ROAD TO PRR

March 2004
BDA cancels a previous alignment of PRR proposed in 1995 and finalises new alignment
Nov 2006
BDA decides to start construction of PRR by April 2007 and complete it by
March 2010
Jan 2008
State government hands over project to National Highway Authority of India. NHAI hands it back
to BDA in 2013
January 2014
HC upholds land acquisition notice issued by state government and dismisses petition filed by farmers
Nov 2014
Project gets environmental clearance from Environmental Impact Assessment Authority. Ministry of Urban Development also clears project
May 2016
State restarts process of completion of PRR, seeking help from NHAI again
March 2017
BDA decides to have a Special Purpose Vehicle (SPV) to speed up land acquisition and raise funds for completion of project
July 2017
SPV is registered under Companies Act

Experts have found several shortcomings in the present alignment of PRR. Though the PRR has been realigned a couple of times already, experts found shortcomings in the realignment that they say “will defeat the objective of the project.” Complaints include short radial distance between PRR and ORR and concave alignment in the north-east part of the project Urban affairs expert V Ravichander said that PRR, if taken up, should be an area development project. “The project should not be like Outer Ring Road (ORR) which is a strip development project.

While constructing the ORR, civic authorities only developed a particular strip of land, which did not help in free flow of traffic,” he said. He said, while taking up the PRR project, they should ensure that the entire area around the road is planned in such a manner so as to ensure free flow of traffic. Kala S Sridhar of the Center for Research in Urban Affairs at Institute of Social and Economic Change said that a road that has been planned at a cost of D8,000 crore or more was not economically feasible. “Rather than invest on this elaborate project, the state should shift its attention towards investing heavily in public transport systems,” she said. She noted that the environmental cost of the project will also be huge.

Now we are on Telegram too. Follow us for updates
TAGS
bengaluru land aquisition PRR SPV RING ROAD