Two years ago, Nupur left for Africa and met tribals in Tanzania and Kenya on a solo vacation. “I was fascinated by the similarities of the two cultures — Indian and African,” says the NIFT almunus. She showcases this resemblance by incorporating Bandani (tye and dye) prints that mirrors the dotted face paint among tribals in the continent.Nupur’s summer line sports a mix of grey, black and plum mixed with reds and blues.

“When I saw their body art, it instantly reminded me of Gujarati bandhani. I was inspired by the people were so traditional in the way they dressed,” says the 38-year-old.Following her graduation, Nupur joined couturier Anamika Khanna in 2004.  After working as an assistant designer with Khanna, she started her own  label in 2006 and debuted on the national runway in 2012. 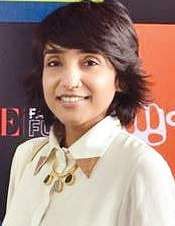 The designer, who is know for her sporty dresses that blend in luxury with athletic wear in the form of athleisure goes a step ahead with this new line, incorporating the tradition Africa with Indian designs and embellishments. Her collection features an interesting array of dressing styles from the kaftan maxi to the sharara jumpsuit.

In her 20-day long solo trip, Nupur says, she was awed by the magnanimity of what the African culture had to offer.  “Their body tattoos and piercing have been expressed with fringes, glass beadwork and metallic embellishment,” she adds.

Does she fear her collection raising questions of cultural misappropriation? “Not at all. This is my interpretation of African art. This isn’t misappropriation, it is an expression of my African impression,” she adds. Nupur believes all her works are deeply rooted in Indian culture.

Her ombré-hued saris, which trace intelligent layers and fringes too find their inspiration in Africa. “I saw that the drapings there were inspired by how we wear saris here. I aim to strike a balance between the two cultures with the piece,” she says.

Nupur was in the city recently at the SS17 collection showcase along with designers Mrinalini Gupta, Jayanti Reddy, Payal Pratap and Rajesh Pratap Singh at Collage Shop India.