City to march lockstep with Gorkhalis across world

Unity rally will see supporters walk through streets across 150 towns and cities; 2,000 Bengalureans have already signed up

BENGALURU: Several rallies for the cause of Gorkhaland have been organised worldwide, ever since the Darjeeling hills shut down after an indefinite strike on June 12; Bengaluru itself has had three rallies. On July 30, about 2,000 Gorkhalis in the city are to walk through the streets once more but, this time, people in 149 cities and towns across the globe will march lockstep with them. 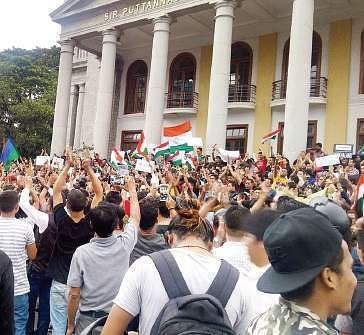 Called the ‘Global Rally Unity March’, it was originally conceived in the US. Manish Chettri, Gorkhali residing in North Carolina, drove hours to get to Washington DC on July 3 to protest against the Gorkhaland unrest. About 40 Gorkhalis living in the USA had made it to the rally.
Manish thought about organising a unity rally across the US but then developed the idea to cover countries across the world. In the last week of June, when Narendra Modi was on a US visit, Manish went to submit the Gorkhaland petition. One of the officers, who according to Manish is a close confidante of the Prime Minister, told him that Gorkhaland will never happen without unity. “She told me that we would be submitting the same petition even after ten years, if Gorkhalis are not united,” he says.
The global rally is to create noise, says  Manish, adding, “Few people on the streets won’t make much of a difference, especially in the US where Gorkhali population is less... If all of us step out together, there will be an impact.” His idea reached Bengaluru as well.

Siddarth Bhitrikoty, founder of Gorkha Youths of Bangalore, is managing the south India zone for the rally. He says four cities in South India namely Bengaluru, Hyderabad, Chennai and Kochi will be participating in the march that starts at 10 am across India.
This rally in Bengaluru is being supported by the only registered Gorkha association in Bengaluru, which goes by the name of NEP India Foundation, whose first Gorkhaland gathering in Townhall on June 20 brought over 2,000 supporters.

“We will march from Mysore Bank Circle towards Freedom Park, via KG Road,” says Siddarth. They are also looking to raise funds for daily wagers who have been left without pay during on-going indefinite strike.

The target audience of the rally are also non-Gorkhalis and Manish says musicals and skits on a phone call conversation between a mother and a daughter will be enacted. Stories, based on true accounts, will also be shared. The march is being cordinated worldwide using Facebook and Whatsapp.
“Gorkhalis in New York will be marching towards UN headquarters, those in London towards Amnesty and those in Netherlands towards International Court of Justice,” says Manish.

Now we are on Telegram too. Follow us for updates
TAGS
Gorkhaland Gorkhalis Global Rally Unity March