A stray dog died a painful death due to starvation and also due to the cruelty of some miscreants.

BENGALURU: A stray dog died a painful death due to starvation and also due to the cruelty of some miscreants. While doctors found stones and bones in the dog’s stomach and intestine, an X-ray revealed two steel pellets in her rib cage. 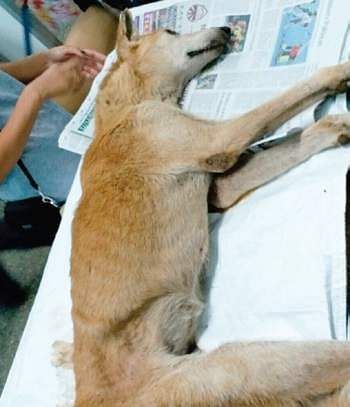 Yangchen Tibet Dolkar, an employee at a private software firm and a resident of Frazer Town, had rescued the dog from the area on Tuesday night. “The dog had been abused. She has two stainless steel air gun pellets in her rib cage. Such pellets are used in licensed guns to chase birds away,” she said. According to Dr Akshay, who treated the dog, she lived with these injuries for at least a year.
He added that when dogs are hungry, they tend to eat stones and bones to satisfy their hunger, as a result it ends up blocking their stomach and intestine.

Yangchen said, “We found the skinny dog in a dry gutter. She had been recumbent for some time and as a result there were bed sores on her hip joint, leading to maggot infestation. I took the dog to my house and the next day to Sarvodaya Sevabhavi Samstha, an NGO which runs a veterinary hospital. The dog died as it was suffering from multiple organ damage.”

Yangchen added, “As the veterinarian examined her, he asked us to touch her stomach. It was as hard as a rock. The doctor said, ‘what you are feeling are stones and bones’. Apparently, when dogs don’t get food they resort to eating stones and whatever they find to satisfy their hunger. The doctor artificially stimulated her stomach and she threw up in an attempt to get rid of the stones.”
“It is common for dogs to be abused. We must change this. In fact, we will form a trained rescue team which will go from ward to ward to help the stray dogs,” she said.