Never-say-die attitude is what made them winners

BENGALURU: It was no easy journey for Sheikh Tanveer Asif to success in UPSC exams. Overcoming numerous odds, this candidate from Kalaburagi secured the 25th rank.
It was his second attempt at the exam. Asif said as he was preparing for both state civil service and IAS exams, he was unable to dedicate his time fully to the national level exams.
An engineering graduate from MS Ramaiah Institute of Technology of Bengaluru, he stayed in Delhi for two years to prepare for UPSC exams during which his family had to manage with his father’s pension of `14,000, said Asif. 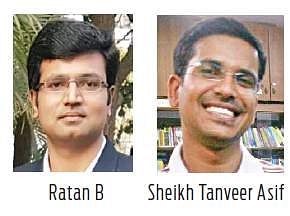 The 24-year old added that as he was unable to clear the prelims in the first attempt, he dedicated two years from 2015 just to prepare for UPSC. His subject of interest is political science.
“Consistent efforts and perseverance helped me fly high,” said Asif.
Dr Naveen Y Bhat, another candidate from Karnataka, secured the 37th rank in the UPSC exams. An alumnus of Bangalore Medical College and Research Institute, he underwent training for civil service exams as he thought his medical profession would make little impact on the society. This candidate from Mangaluru believes that he can achieve better for the society with his UPSC success.

Visual impairment no hurdle for him
For Kempahonnaiah,  who secured the 340th rank, it was no small feat for someone with a visual impairment. He hopes to bag an IAS posting with his score.
This achiever had to drop out of school when he was in class 4 when his visual impairment began aggravating. Later, he joined a school for the visually challenged in Mysuru. Then on, there was no looking back for him. He went on to pursue his degree from Maharaja’s College and post-graduation from KSOU. Currently, he is working as a lecturer in Mysuru’s Ontikoppal College.

“My wife Achitha has been very supportive. I wrote the exam with support from my friends. My wife would prepare notes for me and make records. This helped me prepare for exams,” he added.
Yet another engineering graduate from Bengaluru made it to the top in UPSC exams. In his fifth attempt, Ratan B got the 178th rank.
Having passed out of RV Engineering College, he initially worked with Cisco for three years before beginning his preparation for the civil service exams in 2013. Last year, he got the 464th rank and was an IRS probationer in Hyderabad. “I am happy with my rank and confident of getting an IPS posting,” he said.
His father Bettegowda works with the BBMP as a first division accountant. Ratan lost his mother while he was pursuing engineering.