Bengaluru's lakes chirping back to life

The water level in many lakes has risen owing to the pre-monsoon showers and bird life has become active again; several smaller reservoirs are also filled now

BENGALURU: Yes, the rains did cause power cuts, uprooted trees and left many roads water-logged. But they also brought much cheer by filling up lakes in and around the city and facilitating the arrival of migratory birds.

Usha Rajagopalan, a member of Puttenahalli Neighbourhood Lake Improvement Trust (PNLIT), said, “The rains have increased the water level at Puttenahalli lake by a couple of feet. An Oriental Snake Bird was spotted in the lake, which is only the second or third time it has been seen here.

During summer, prior to the rains, the water level had fallen and patches of the lake bed were visible, but not anymore.” 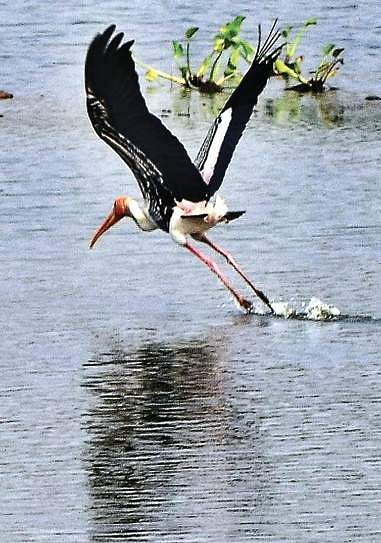 Madiwala lake, one of the city’s biggest lakes, is a very popular spot frequented by Bengalureans. Following the recent rains, the water level has risen by 4-5 feet and is now almost filled to the brim. While Spot Billed Pelicans are sighted here almost throughout the year, the rains have attracted another species, the Painted Stork.

The rains have filled up several smaller reservoirs in the city. Pelicans were spotted at Lalbagh lake inside the Lalbagh botanical garden this week.
Dr Jagadish, joint director, Department of Horticulture, said, “There weren’t any Pelicans just 10 days ago when I last visited the lake, but they are known to come here.”

Sanjeev Dyamannavar, who stays near Rachenahalli lake at Thanisandra, says the water level had been a bit low for two months before the rains. “The lake looks better now. The water level has risen so much that it is in fact overflowing. And the rains have also improved the water quality,” he pointed out.

Over the effect of rainfall on a lake’s bird life, Chris Bowden, Programme Manager for SAVE (Saving Asia’s Vultures from Extinction), said, “It has a huge impact on vegetation, insect life and all related aspects.” He explained that these changes percolate all the way up the food chain and hence help the bird population.

Ram Prasad, a member of the NGO Friends of Lakes, however, said that at a lot of lakes, proper arrangements to tap rainwater had not been made. “Many lakes have been built in such a way that no rainwater enters them, except directly from the sky.”