UP SIT team in city to probe Tewari’s death

TWO police officials from the Uttar Pradesh Special Investigation Team (SIT) arrived in the city on Thursday in connection with the probe over the death of IAS officer Anurag Tewari.

BENGALURU: TWO police officials from the Uttar Pradesh Special Investigation Team (SIT) arrived in the city on Thursday in connection with the probe over the death of IAS officer Anurag Tewari.
The Karnataka-cadre IAS officer was found dead on the roadside near the Meera Bai guest house in Lucknow on May 17, on his 36th birthday. 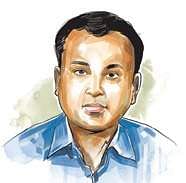 The team consisted of SIT  Additional Superintendent of Police Avanish Mishra and inspector Anand Shahi. They were accompanied by Tewari’s brother, Mayank.
As part of the ‘general investigation’ into the untimely demise of Tewari, the officials visited offices of the Department of Food and Civil Supplies and the Karnataka Food and Civil Supplies Corporation. They are also said to have visited the officer’s last residence in Bengaluru and met the Chief Secretary during the day.

An SIT official, who did not wished to be identified, said the team is probing allegations that Tewari was murdered. “The team will question various individuals and assess documents concerning the veracity of the allegations,” he said. To a question, he said the officials will also question ministers “if need be.”
The official said the team is expected to stay in the city for a few more days to continue the probe.
According to sources in Food and Civil Supplies Department, the team visited their office premises around 2 pm on Thursday, as Tewari’s last posting was as Commissioner of the Department. The officials checked the personal files of the deceased officer.
“The investigation in the office lasted till 3.30 pm after which they left for the office of the Karnataka Food and Civil Supplies Corporation,” a source said.
Tewari was also the managing director of the corporation during his tenure as commissioner of Food and Civil Supplies Department.

Following the death of Tewari, his brother Mayank had alleged that the officer was on the verge of exposing a huge scam in the Food and Civil Supplies Department. This had provided ammunition to the opposition parties claims that Tewari was ‘murdered’ by the food grain mafia. The state government, meanwhile, dismissed the claims and maintained that they were open for any probe.