Mr Repairman, your days are numbered!

The electronics repair trade is dying a slow death and with it hundreds of people who have been in the trade for years.

BENGALURU: When their phone is damaged or broken, people usually buy a new one rather than getting it repaired because, let’s face it, there is more value for money in replacing your phone.

However, this trend has not only lewd to the collapse of the electronics repair market but has rendered many associated with the trade to become “replacers” or explore other avenues. 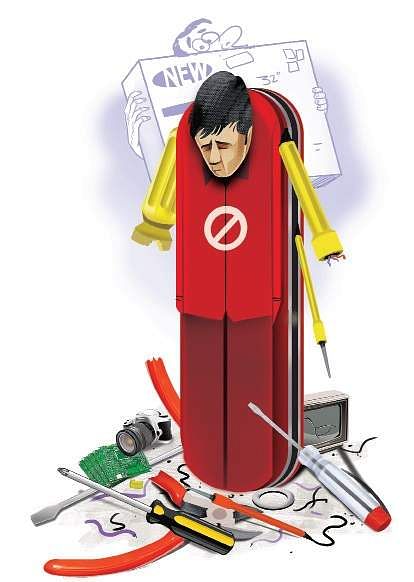 While on a vacation in the deserts of Dubai, Himadri Das lost hold of his camera and it fell into the sands. The jammed lens stopped zooming and the camera was rendered useless.

When he was back in the city, he approached many local repairing shops but the deals they offered were not fair. “They wouldn’t repair the camera because it is a painstaking work to filter out every spec of sand. The total cost was coming around Rs 5000,” says Himadri. “My camera was priced about the same, so I thought why should I repair it when I can buy  a whole new one.”

Now think about this very same situation, but in a time when our grandparents were young. They would painstakingly try and get every grain of sand out of the camera and get it repaired, adds Himadri. “Since 2000, the dynamics of the economy has changed. Now electronic machines are use -and-throw products not use-and-repair ones,” he says.

Nerris D Cruz is an expert in repairing electronics and electrical products. He has 15 years of experience. He talks of   the transition he has witnessed in the repair market. When Nerris started his training in repairing, charges were as low as Rs 10 to fix a Rs 5,000 product. Today, the cost of repair is equal to the price of the product itself, he says.

“Repairing was easy then. All products came with a circuit diagrams and every spare part was available in the market,” says Nerris. Now it is different. Taking the example of a washing machine that he is currently fixing, he says. “It has a problem with the electronic panel. As I opened the panel, I figured that there is a plastic base which was making it impossible for me to remove the component... I could investigate the root of the problem,” says Nerris. He has to buy and replace the product with a new electronic panel altogether, he adds.

“If you see the problem today, it is a difficult task to even open the product because the manufacturers would not want it to be repaired so that they can sell more,” Nerris says. The only solution would be if people start raising their voices against this ploy of manufacturing companies. “A single product repaired can reduce our carbon footprint,” he adds.

One of the other reasons why repairing is expensive is because the repairers are forced to replace the product when parts are not available and, added to that, is the labour cost.

Turning the tide, one cafe at a time

“We are fighting to get back the dying trade of repairing,” says Purna Sarkar, co-founder of the Repair Cafe Bengaluru. The organisation has hosted about 12 pop-up recycling workshops and training in the city since 2015. “Recently I went to small repairing shops in Shivaji Nagar and I found out that that the generations of repairers have subdued,” she says. “There was this one person whose father was into repairing electrical products. He moved on to the automobile industry because this, at least, has a future,” she adds.

While our old TVs had ample places where they could be repaired, present day LED TVs are use and throw product, she says. Purna started the organisation along with a few of her friends who were also homemakers like her. Michael D’souza was in the repairing business for 25 years. It has been four years since he moved to teaching. He teaches music lessons as he says repairing, as a profession, was getting harder each day. “I was mostly into washing machines,” says the 50-year-old. “Then it got harder each day to access the washing machine parts and secondly, the company had their own engineers to fix the product that came along with warranties,” he shares.