Roll, fall and heal with your moves

Welsh and French dance artist Lucy uses Japanese martial art, yoga and other movements to relieve herself of stress.

BENGALURU: Healing comes in all forms. Some take a jog in the park, some paint, some meditate and some go on vacation. For Lucy May Constantini, a Welsh and French dance artist who was recently in the city to conduct a workshop at Shoonya - Centre for Art and Somatic Practices, healing comes in the form of movement - and that is what she wants others to experience as well. 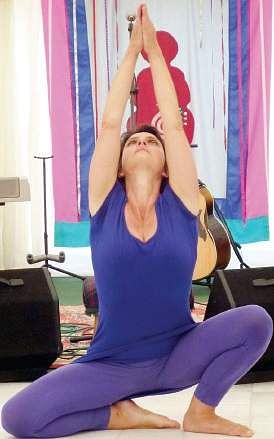 Trained in Aikido – a Japanese martial art, Kalarippayattu, yoga and contact improvisation – Lucy has dedicated her life finding a meeting point between these practices.

Talking about how she came across Aikido and contact improvisation, Lucy tells City Express, “I first encountered Aikido through a dancer called Laurie Booth when I was training in London, and he was also my first contact improvisation teacher. One of my formative dance technique teachers, Paul Smith, also happened to be a very senior Aikido practitioner. And then there is contact improvisation, which I’ve been working with since 1997, which has Aikido as one of its roots,” says Lucy.

For those of us who are new to contact improvisation, Lucy explains that it is a system of movement initiated in 1972, and is based on the communication between two moving bodies, and their combined relationship to the physical laws that govern their motion — gravity, momentum and  inertia.

The body learns to release excess muscular tension and experiences the natural flow of movement. This includes rolling, falling, being upside down, following a physical point of contact, supporting and giving weight to a partner.

Having studied philosophy in India, Lucy is no stranger to the country. “I studied Buddhism in McLeod Ganj and Advaita Vedanta at the Swami Dayananda Ashram in Rishikesh, both in 2009. I also did my third Vipassana meditation retreat at Tiruvannamalai last year.” she says.

She’s also been to Bengaluru before. “Bengaluru was my first introduction to India, so it’s always a special place to come back here. I always enjoy the community of dance, artists and movers here, though it’s changed a lot since 2002,” Lucy adds. Before Bengaluru, Lucy was in Jaipur, where she also took classes. With Bengaluru marking the end of her India trip, Lucy hopes to make it back to the country soon.

Although she says that she isn’t medically certified to speak about the health benefits of Aikido or contact improvisation, she does say that the value of these practices has been documented widely. She says that it contributes to overall wellbeing and helps people have a deeper mind-body connection.