Have a summer fling with alcohol art

BENGALURU: The Summer Art Marathon brings together different artistic styles and mediums – from alcohol and resin work to magazine art. The aim is to show some of the older and newer techniques in painting, and the marathon is being held at Art Houz, Vasanth Nagar, until June 10.

Experiments of a closet artist

Thota Ananda Swaroopini, who calls herself a closet artist, started experimenting with alcohol and resin art about five months ago. She says, “I got the idea from my sister’s friend in Canada. She sent me pictures of some of his resin artwork. Then, I went looking for place to source resin from.”

The self-taught artist has experimented with alcohol and resin on wood and furthered her work on canvas.

Resin art is a medium incorporating epoxy resin with various colourants and resulting in a piece of art which is bold, vivid with great depth and a glass-like finish. The process begins with mixing of resin with hardener and desired colourant. A chemical reaction ensues and time becomes an important element in the work.

She says, “I get only 30 to 45 minutes to work on a piece because it solidifies soon. Sometimes, I have had to use blue torch or heat gun to melt the colours again.”

Ananda adds that working on wood gives more options than canvas. “I can convert my work on wood to a piece of furniture such as table top and stool, as per the requirement of the client, or a wall art. But canvas is restricted to wall-hangings.” She finds her inspiration from nature and reflection. “I am still experimenting,” she says.

She comes from a family of film artistes. She is an art director and has assisted her family in their films.
At the marathon, senior artist G Subramanian shared his work and ideas with young talents. He says, “I have been displaying my work from  1986. I didn’t want to just talk about my journey but show them the pieces. I have even  displayed my first collage.”

Subramanian has been into arts from his childhood. His father was a theatre artist. He grew up watching how the faces of these artistes transformed after they put on their make up. But only after he saw original pictures of different renowned artists while he was working as a graphic designer, did he realise that he wants to be a painter. He shifted from Saudi Arabia to India in 2003 and has been into arts ever since. His major work is a series on girls, She, drawing inspiration from his daughter.

He says, “My pictures are always happy and positive. You will even find the mythological characters such as Krishna Radha and Ganesh, that I draw, charming and smiling.” He starts with drawing simple silhouettes, then fills them with different hand-torn colourful magazine photos and blends them with acrylic paint. He takes the pictures from National Geographic magazine, but uses only two pages from it. “I read the rest of the pages and keep it in my library,” he says.

He claims this artwork gives a look of a painting and has been well received by people across the country and abroad.

Presenting a balanced view on history 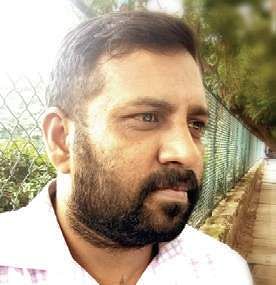 Madhusudhanan has done a series of conceptual abstract sketches, tracing the history of mankind from Stone Age. He is trying to understand, question and dissect how our history has been moulded, how history is written by the powerful, how we never know the whole truth behind any event. He is questioning the pre-set understanding of history through his dreamlike fantasy.

“There are many mysteries. There are many unknown people who have contributed to our history but we find hardly find anything on them. People talk about the kings who have ruled but do not talk about the soldiers who have fought wars for them. So many people died unpopular. We have lost many great sculptors and painters.”

He gathered information on such people from his travels across the country.It took him eight years to develop the entire series.

He says, “I took a long break and have been travelling. Even my mother did not know where I was heading to. The biggest challenge is that people do not understand the lifestyle of an artist. They do not know what I am working on.”