SayTrees, a NGO dedicated to increasing Bengaluru’s green cover, got 2,000 volunteers together to plant 5,500 saplings in two areas in the city - in Sarjapura and Bommasandra.

BENGALURU: SayTrees, a NGO dedicated to increasing Bengaluru’s green cover, got 2,000 volunteers together to plant 5,500 saplings in two areas in the city - in Sarjapura and Bommasandra.

With the group conducting most of its drives during the monsoon months, — from June to September — one wonders how they maintain these saplings during drought conditions.

Talking to City Express about this is Durgesh Agrahari, head of partnerships and projects, SayTrees, who is the only full-time member at the organisation. 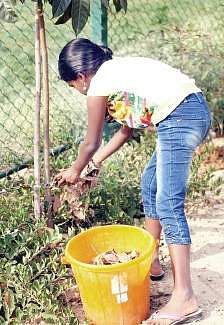 “There’s nothing like rainwater to help saplings grow and that’s why we prefer having these drives during the monsoon months, as borwell water isn’t as effective. However, due to the drought this year starting from March, we have been saving six lakh litres of water every 20 days,” says Agrahari.

He adds that they use sewage treated water, which is rich in minerals, and it thus boosts the growth of saplings.

Their plantation sites are in Hebbal, Koramangala, Yeshwantpur, KR Puram, CV Halli, among others. Apartments nearby and the Bangalore Water Supply and Sewerage Board (BWSSB) supply them with the water.

“For this drive, we got sewage treated water from an apartment in Sarjapura. For the upkeep of the saplings in Bommasandra, Biocon will be supplying us with water,” Agrahari says.

SayTrees plant saplings in open areas. One needs to get a permission first to plant trees in open spaces.

Agrahari says they have been lucky with getting permit, as they worked closely with the lakes division of the Bruhat Bengaluru Mahanagara Palike (BBMP) that has been supportive of their initiative. “I can’t speak about the BBMP at large, but the lakes division, with whom we have been working for the last four years has been very proactive and helpful. We just have a meeting with them and the permission is sorted,” says Agrahari.

He also says it is easy to sit at home and blame the corporation in the name of activism, but true activism comes into play when people connect with nature directly.

“As individuals, we need to do our part and think about our end-to-end actions. There are 70 lakh registered vehicles in the city. Imagine if the owners of all those vehicles realise that they have a responsibility towards nature and plant a sapling each? We would have that many trees in the city,” he says.

Talking about future plans, Agrahari says that they are now working closely with farmers in Andhra Pradesh and Karnataka to plant fruit-bearing trees, which will also contribute to their livelihood. Apart form this, they are planning on opening SayTrees chapters in other cities such as Delhi, Hyderabad, Maharasthra and rural Karnataka and Andhra Pradesh.

He also says there will be a massive drive in the second week of July, where they will be planting a mini forest, most likely around a lake in Bommasandra.

They will be creating a very dense forest using the Miyawaki method of afforestation, wherein the forest grows 10 times faster than the traditional forest.