Victors and the defeated chisel out a city

Walk through a history that shaped Bengaluru’s contours and horizon.

BENGALURU: How did the city grow with the many rulers it has had? Vinod Kumar T and Bincy Joseph take a walk ‘In the Footsteps of Raja’s & Sultans’, organised by Bangalore Running and Walking Tours, to trace the memories they have left. Praveen Singh, founder of the Tours, is the guide. 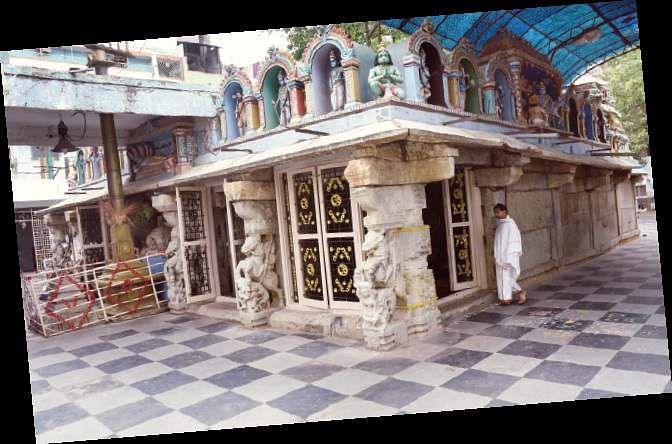 Ranganathaswamy Temple is an ancient and famous Hindu Vaikhanasa temple which is dedicated to lord Vishnu. It was built in 1638, when Kempegowda was attached by the Maratha rulers and had to flee. This temple in Chickpete follows the Vijayanagara style of architecture and has beautifully carved granite pillars with Yali figures, which are part lion, part elephant or part horse. Idol of Vishnu is seen in a sleeping posture here. An inscription in the temple is written in ancient Kannada.

The Canarese Chapel which was in a Greek Roman structure was built by William Campbell in 1834. Later on this Chapel was taken over by the Londonmissionary Rev Benjamin Holt Rice who also was a Canarese scholar and a pioneer of education in the Bangalore Pete region. Then this Chapel was considered unfavourable, so it was destroyed and, in 1917, it was replaced back by another Classical European style structure with Tuscan columns, pediments and keystone-arch windows. The present building, on Avenue Road, is the third version of the Chapel, today it is called the Rice Memorial Church.

We start with the Pete gate, one of the nine in the fort, through which the British entered Bengaluru in 1791. Right outside, now the entrance of Avenue Road, stands the Yelahanka Gate Anjaneya Swamy Temple. It was customary for the rulers of the Vijayanagara Empire and their vassals to build a temple for Sri Anjaneya at the entrance of the fort as a protector of the territory. The Hanuman idol here is modelled after warriors. 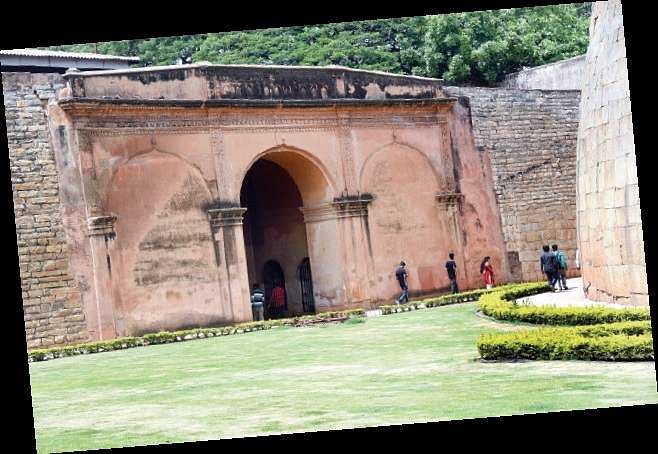 Bangalore Fort was built in 1537. Haider Ali replaced the mud fort with a stone fort in 1761. This particular section, which houses an armoury and administrative blocks. The army of the British East India Company, led by Lord Cornwallis on 21 March 1791, captured the fort in the Siege of Bangalore during the Third Mysore War. Now this fort’s Delhi gate is located at Krishnarajendra Road, and two bastions are the primary remains of the fort.

In 1537 A.D Kempe Gowda conducted a ground-breaking ritual and festivities by ploughing the land with four pairs of decorated white bulls in four directions. The centre – presently known as the Doddapet and Chikkapet junction – is from where whole of Bengaluru started. Here Avenue Road and Old Taluk Kacheri Road cross each other.

The wandering Sufi saints, Hazrat Tawakkal Mastan Shah and Hazrat Manik Mastan Shah,  migrated to Bengaluru some 300 years ago. It is believed that they came from Andhra Pradesh, during the reign of Hyder Ali.

Legend goes that they worked as masons when Hyder Ali was rebuilding the old fort constructed by Kempegowda I and they never took any remuneration for their hard work. Having learnt all about the mystical life of the mastaans who used to do voluntary masonry work at his fort site, Hyder Ali penitently built a mosque as wished for by Hazrath Tawakkal Mastan Baba. This heritage mosque, which has been around since the 1780’s, is now situated on the most congested shopping lanes of City Market Krishna Rajendra Market. 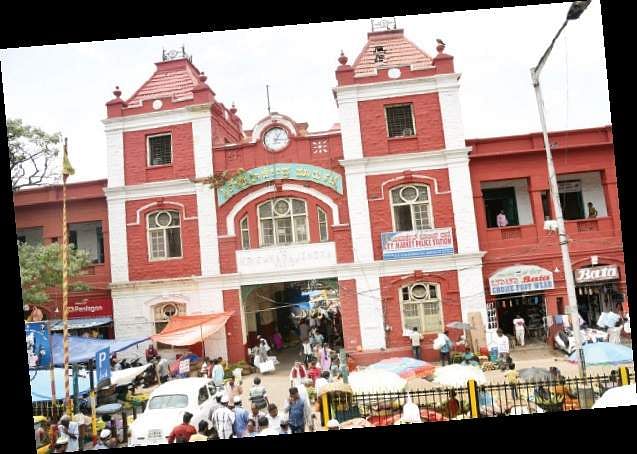 This came up in the buffer zone between two forts – the larger fort that held the city and the smaller military citadel. This became a market place in 1790’s after the capture of the city by the British in 1791. After the Third Battle of Mysuru some of the Britishers had camped over and then captured the city.They converted that place into a public place, which slowly turned into a market.

The armoury, at the Kalasipalyam New Extn, City Market, was built by Tipu during his reign in Bangalore. There are couple of armouries like this, one at Srirangapatna which was shifted recently in March.

This structure was built entirely in Malabar teak wood and stands adorned with pillars, arches and balconies. Tipu Sultan used to conduct his durbar (court) from the eastern and western balconies of the upper floor. There are beautiful floral motifs embellishing the walls of the palace. The site also holds a painting of grand throne visualised by Tipu Sultan himself. This is situated at AV Road, Chamrajpet. The rooms in the ground floor have been converted into a small museum showcasing various achievements of Tipu Sultan and his administration.

There is a replica of Tipu’s Tiger, the original is in the Victoria and Albert Museum in London.