With Namma Metro set to chug along to the south, traffic police draw up action plan to decongest city’s biggest and busiest transport hub.

BENGALURU: Can Majestic ever be traffic-jam free? Here is some hope.

The Bengaluru Traffic Police are drawing up an action plan to tackle the mess. Set to shortly turn into an intermodal transit centre, integrating bus services (both BMTC and KSRTC stations), Metro (both North-South and East-West corridors) and trains (city railway station), Majestic will get even busier.

The traffic police are working with a consultancy firm, which is required to submit a report on the pedestrian and vehicular movements in the area.

Additional Police Commissioner (Traffic) R Hithendra said, “The footfall in and around Majestic will increase once the North-South corridor (Nagasandra to Yelachenahalli) is operational. Majestic will be an intermodal transport hub for commuters to switch between two metro corridors, a mofussil bus station, city bus station and railway station.”

He said the traffic police will come up with some modifications in the junction and also place barricades and signages to ensure the safety of pedestrians. 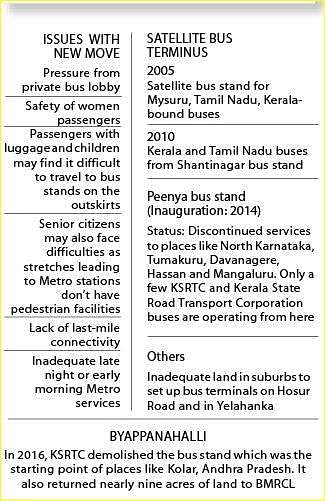 The Department of Urban Land Transport has already prepared a plan to connect the metro intersection at Majestic with the bus stations. However, the work has not started because of the involvement of multiple agencies such as BMRCL, KSRTC, BMTC, South Western Railway and BBMP.

“Poor coordination between multiple agencies has delayed the project to link metro stations to bus stations. Commuters are forced to jump through to reach the railway station from the metro station because of the lack of pedestrian facilities.”

“Nearly 10 lakh commuters are expected to reach Majestic once the North-South corridor is operational but government has not done anything so far,” he added. Many commuters complain that pavements in the areas are encroached upon by hawkers and autorickshaws.

Now we are on Telegram too. Follow us for updates
TAGS
Namma Metro traffic police busiest transport hub.