While SSS is trying to keep its ABC centre running, animal activist files a complaint against them

BENGALURU: A FIR has been filed against Sarvodaya Sevabhavi Samstha at Banaswadi police station based on a complaint by Naveena Kamath, animal activist and animal cruelty officer, BBMP, for alleged irregularities in their ABC programme.

Naveena says she received reports of a dog that died because of a botched up sterilisation procedure. “It was a female dog and was found by some volunteers near their centre in Jakkur,” she says. “They took her to CUPA’s private clinic in RT Nagar but could not be saved because she lost a lot of blood, the stitches after the procedure broke open and her viscera was out. 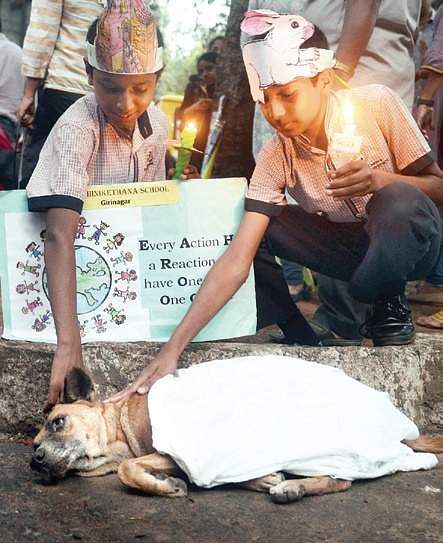 The stitches should have been allowed to heal. The dog was later buried at a median on Outer Ring Road, Banaswadi, by Mohan who picks up carcasses of dogs and buries them.” Naveena had not seen the dog herself. “I went on Monday but by then the dog was already buried. The pictures were posted on the Facebook page of CUPA,” she says.
Vinay More, trustee of Sarvodaya, rubbishes her complaint. “I have investigated the case,” he says. “The dog was found in Hebbal near Presidency College. It was an accident case. ALAI was called in for rescue. They took it to the hospital but the dog did not survive.”

Rescuers say not negligance
Sajesh and his ALAI (Animal Lives are Important) team also claims that the dog had an accident. “We did the rescue. I picked the dog with my bare hands,” says Sajesh. “I was there with the doctor when it passed away. The doctor also said it seems to be an accident case. It is also a busy junction with Presidency College nearby. So, there are many bikes and cars running on that road. Also the hind leg was completely immobilised. It could also be a spinal injury.”
Sajesh asks how can anyone can file a complaint when they weren’t even there at the scene. “I have also seen the initial pictures of the dog and it did not appear to be a badly done sterilisation procedure. Instead (of targetting SSS), why can’t these people do something to solve the (stray dogs’) issues.”

He says ALAI takes about 100 cases to Sarvodaya and there has not been even a single case where the dogs’ stitches came open. “There are only two centres that run ABC programmes. Instead of putting them in a spot, people should stop hatred, politics and work towards the betterment of the dogs,” he says.
But Naveena says there have been several complaints about animals being let out after a couple of hours post surgery. “I have nothing against the NGO at all. But I have been receiving several complaints that the dogs are asked to be taken back by the rescuers, with the NGO staffers asking them to keep them at homes or be left on the road after the surgery,” she says, adding, “They are street dogs and cannot be easily confined to a home environment.”

Five says is ideal
She says, ideally, they should retain the dog at least for five days. “I had taken my pups to neuter them and they took a week to recover.” She says she doesn’t have evidence but has received about 18 cases around Bengaluru of dogs dying after the surgery, and that they were found dumped in different places such as Jayanagar, Nayandanahalli flyover and Chamarajpet. “I get these reports only after a week after the incidents,” she says. “Hence, I couldn’t verify them.”

Dr Akshay Prakash from Sarvodaya says, “Instead of filing complaints, if they had contacted us suggesting better measures, we would have welcomed them.”
Naveena claims that she has written to the animal husbandry department and the officials have issued circulars to the NGOs asking them to follow proper measures for the ABC programme.
But Dr Akshay says, “We haven’t received any circular. We release the dogs after three days when the doctors certify them fit to be let out. When someone brings in dogs, we get a consent letter from them before the surgery that they will be responsible for post surgery care. In such cases, we release them immediately after surgery.”

’File a case against BBMP’

Vinay says a complaint should be filed against Bruhat Bengaluru Mahanagara Pallike for not providing proper facilities for the ABC programme. “The entire programme has been affected. We are now doing it only in North and East Bengaluru,” he says. “Our sterilisation programme had reached 80 per cent of the city but now has come down to 40 per cent. Give us less cases and proper facilities (if you demand longer boarding for dogs).”

Naveena Kamath also says that she’s disappointed with the BBMP. “Instead of spending money on steel flyovers, why can’t they spend on providing better facilities for the ABC centres. ABC is a public programme.”
When City Express contacted Dr Anand, in-charge of ABC programme, BBMP, he said he does not have permission to speak to the media.