BENGALURU: A three-day festival celebrating director Shripad Bhat’s contribution to Kannada theatre ends today with the play Chitra. Three plays directed by Shripad featured in the festival – ‘Misteek’ by Sadat Hasan Manto, and ‘Chitra’ and ‘Kempu Kanagale’ by Rabindranath Tagore.The play “Chitra” written by Rabindranath Tagore revolves around the theme of love and beauty. The director believes that the play speaks to the millennials towards its climax putting women characters dealing with an identity crisis in the forefront. 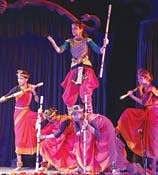 “Though the play was written by Tagore in 1947, over the years men have continued to make the same mistakes as he shows in the story,” says Shripad.
Times have changed, but the mentality hasn’t evolved among men, feels the director. “I have added a few twists and made modifications to the play to make the story more relevant,” he says. The story has been infused with new ideas, claims the director.

“Many talented and skillful directors live in villages just like me. So, when my efforts are glorified, theirs too find hope of new opportunities,” says Shripad.
The organiser of the Shripad Bhat Ranga Utsav, Sandhya, believes the more one is involved in drama the more one is devoted towards social reforms.

The author of Adhuvae Ranga Sallae has organised several art and theatre events at Ranga Shankara. She informs that the troupes and actors performing at the festival come from different socio-economic backgrounds and professions.
Several vendors, teachers, autodrivers, farmers, bank employees and mechanics have taken to acting and performance arts in the city, says Sandhya. Catch the play “Chitra”, performed by Nritya Niketana, Kodavooru troupe at Ranga Shankara today, 7.30pm.