BENGALURU: The Outer Ring Road (ORR) encircling the city, built to reduce the traffic volume within, has turned out to be quite dangerous for pedestrians.

Information provided by the Home Department shows that pedestrians are at a particularly high risk on different stretches of the ORR, starting with the stretch from Nagawara junction to Horamavu junction. While no specific statistics are available for pedestrian deaths on the ORR, a total of 2,216 people have been killed on the city’s roads in the last six years. 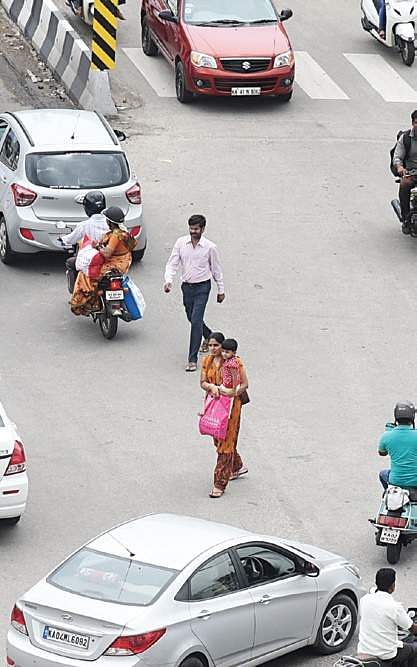 In a written reply to a question raised by MLC T A Saravana, the Home Department has stated that out of a total of 34,021 accidents registered from 2011 to May 31, 2017, a total of 4,841 people have died. Nearly half of this number is pedestrians.

The department, while admitting that ORR has turned into a danger zone for pedestrians, has named 17 junctions where walkers are most at risk. While the second most dangerous stretch is from Horamavu to Doddanekundi junction, the third, not surprisingly, is the infamous Silk Board junction. In short, the road starting from Hebbal junction to Silk Board seems to be a nightmare for everyone -- motorists and pedestrians alike.

Traffic police officials say there are several problems on the ORR that lead to accidents involving pedestrians. Some of the stretches being signal-free means that motorists tend to speed along the way. The roads are also wider than the average roads, but there is no lane discipline. When vehicles are more in number, two-wheeler riders tend to slip in and out of lanes and on the pavements, leading to accidents.

Additional Commissioner of Police (Traffic) Hithendra R, who pointed out that most deaths in accidents were of pedestrians last year, says that problems on ORR are plenty.

“There are no bus bays and pedestrian crossings. The service roads are incomplete and there are no designated parking areas for heavy vehicles. In addition, streetlights and medians are also absent. On these roads, drivers are also very negligent. We have been booking as many cases as possible on these stretches. We have also written to other departments to improve the road conditions on these stretches,” he explains.

With motorists committing a host of offences, pedestrians who take avoidable risks -- like crossing at non-designated places -- get away with it as the police have not seriously taken up drives to curb jaywalking. As the fine for jaywalking is too less, traffic police typically try to advise pedestrians not to repeat the offence. However, repeat offenders are told to appear in court to pay their fines, Hithendra added.

Traffic expert M N Srihari agrees and says encroachment of pavements is also a major issue. “The ORR is not pedestrian-friendly due to encroached pavements. Potholes need to be filled and the road should be good for free vehicle movement. According to norms, a 1.8 metre footpath has to be constructed on both the sides, beside service roads.

Barricades have to be installed to prevent pedestrians entering roads. Footpath space has turned into parking space and taken over by fast food outlets. This has to be cleared. Skywalks should be built every 2-3 km. With these facilities, police can later fine jaywalkers, which would definitely bring a change in traffic discipline for pedestrians,” he felt.

Now we are on Telegram too. Follow us for updates
TAGS
bengaluruOuter Ring RoadTraffic Volume