With no assurance from Centre on denotifying highway stretches in Karnataka yet, shutters are likely to come down on 644 liquor establishments from Saturday

BENGALURU: With no resolution in sight, threat of closure looms large for the city’s pubs and bars falling within 500m of roads notified as National or State Highways. Just a day remains for the July 1 deadline after which all the licenses of bars and pubs will expire and the retail outlets will have to either function without serving liquor or relocate far from the highways.

Shashi Nayak is a worried man these days. A waiter at Pecos, Nayak has been working at the iconic pub for 13 years now. He has been anxiously hearing about the SC judgement and its implications. However, now he’s worried whether the pub would still function if it can’t serve one of its integral items on the menu - beer. A total of 644 outlets in the city have been served notices to this effect.

Some other states where this problem cropped up acted quickly and got highways passing through cities denotified. Owners of bars and pubs in the city have kept their fingers crossed for the same since long.
National Restaurant Association of India’s management committee member Ashish Kothare is also the owner of Le Rock pub on Rest House Road.

He said the association members were not against the SC order.“We just want highways within the city to be denotified as thousands of livelihoods are dependent on the decision. These roads are also not used as highways by trucks or transport vehicles.”He said in the Ashok Nagar Range itself, there were 98 affected liquor outlets.

“Even if we consider 30 staff members for each outlet, about 3,000 people might lose their jobs.”  He added that with the city’s infrastructure in bad shape, this would further deter firms from investing in the city.“Though the government has agreed to give us some relief, it will be difficult to move away from Brigade,” he said. 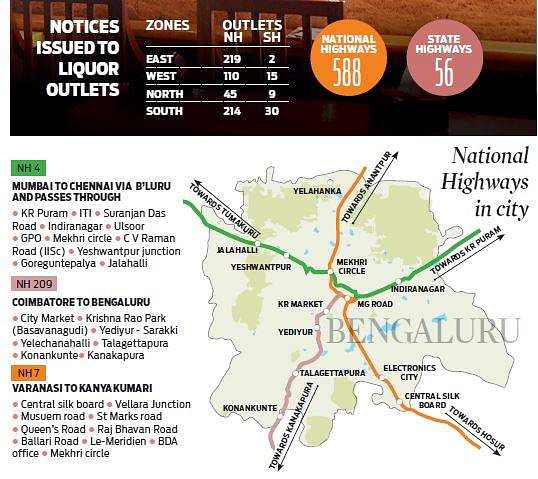 Pubs and bars in commercial hubs are unlikely to get any respite. State officials did not get any assurance during the Wednesday’s meeting in New Delhi. PWD principal secretary, M Lakshminarayana said, “They have neither given approval, nor denied. Our officials are still in Delhi.”

Now we are on Telegram too. Follow us for updates
TAGS
Karnatakapubs and bars