It was another session wasted at the BBMP council on Thursday as three women councillors disrupted the session.

BENGALURU: It was another session wasted at the BBMP council on Thursday as three women councillors disrupted the session.The three councillors — Asha Suresh, Mamata Vasudev and Manjula Narayanaswamy — had protested almost throughout the previous session on May 29. Among other grievances, they had alleged that MLA Munirathna had harassed them and had made it impossible for them to carry out their duties for the ward. Their protest had eventually culminated in a threat to commit suicide as they had taken out bottles of toilet cleaners at the council hall. 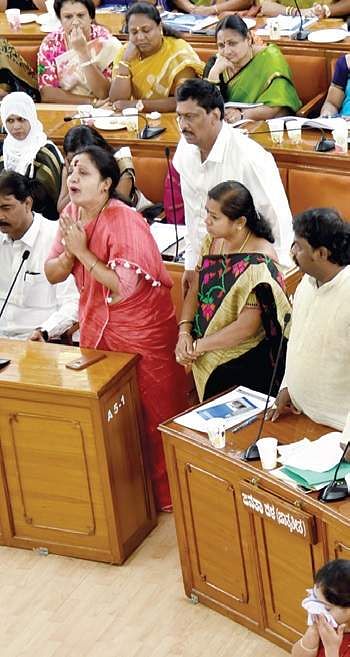 Mayor G Padmavathi had held a hour meeting with the three councillors, officials and parties heads on Wednesday. Despite the Mayor’s repeated pleas, the councillors continued their tirade, alleging inaction on the BBMP’s part and then they sat down on the floor. This time, councillor Asha had another complaint. She said, “Pictures of the losing candidate were pasted on the water tanker in my ward. Would you, or anyone else, tolerate this?” she asked, addressing the Mayor.

The protests forced the Mayor to adjourn the session for 10 minutes. When the session restarted, the Mayor again tried in vain to kickstart proceedings. Recently-elected MLC T R Ramesh, who was present at the council, said, “I understand the pain faced by the councillors, but this isn’t the forum to discuss private issues. Only issues meant for welfare of the public are to be discussed.”
The women continued to sit on the floor, even as another councillor pointed out the need of discussing the problems from other wards as “people were dying of dengue”.

As the situation did not improve, the Mayor tried to ignore the protests and began clearing the proposed works as they were read out by a Congress councillor. This was followed by all the councillors of both BJP and JD(S) to walk out of the hall and stage a protest outside. Lunch break was announced, and the session did not continue any further.

Speaking after the session, Ramesh reiterated that the forum was only meant for public welfare and added, “The session is held once a month and there are so many problems to discuss. As per a rule under the KMC Act, the councillors could be suspended or asked to leave the session if they persist with these disruptions.”