Drought of draught: Coming soon at Bengaluru pubs on highways

State stares at Rs 8,000 crore revenue loss due to closure of liquor outlets near highways; officials continue to persuade Centre, but are yet to get an assurance

Meanwhile, the state government is looking at a revenue shortfall of about Rs 8000 crore due to the closure of bars and pubs on highways. According to Excise department officials, there are 1,00,065 licensees in Karnataka including retail liquor shops, pubs and bars where beer, wine and other hard liquor are sold and served. 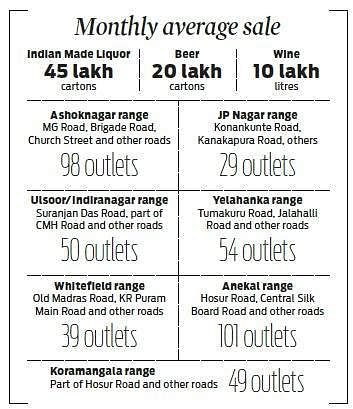 “Earlier, we had estimated that about 55 per cent of these licensees will come under the ambit of the Supreme Court directive. Later, the respective district administrations conducted land survey and found that some outlets/bars are in the safe zone. We now estimate around 50 per cent of licence holders are under threat of closure. This means that the government stands to lose about `8,000 crore in revenue,’’ a senior Excise official said.

Bengaluru that has four excise divisions of which Bengaluru East and South have more number of bars, pubs and other restaurants that serve liquor. Of the 248 bars, pubs and liquor shops in East division, 98 are in Ashok Nagar range that includes M G Road and surrounding areas, followed by 35 in Ulsoor jurisdiction.

According to official sources, last year, they collected Rs16,480 crore in excise revenue of which 33 per cent is from Bengaluru alone. “As half the number of liquor outlets are on highways, we are estimating the loss to be around 50 per cent, which is around `8,000 crore. This is a huge amount. Of this Rs 8,000 crore, close to 40 per cent of the revenue comes from outlets that are located on highways that pass through Bengaluru including Indiranagar, MG Road, Koramanagala, Hosur Road, St Mark’s Road and other places,’’ the official said.

When contacted, Excise Commissioner M Manjunath Naik said they are bound to implement the Supreme Court order and issue notices to liquor outlets that are within 500 metres from the highways.

“We do not have information on the number of liquor outlets that have been issued notices as it comes under respective district deputy commissioners, who are the enforcing authority. I have instructed our officials to check the location when a licence holder applies for renewal,’’ he said.

Government authorities only throw up their hands.

“What can we do? It is not that we did it or wanted to do it. If there was any alternative measures, the state could have taken it by this time. Now it is not in our hands. Only the Government of India can denotify these highways and save the bars and pubs located in the heart of the city.”

“There will be huge revenue loss if the ban is enforced strictly. We are continuously persuading the Centre, but we are yet to get their nod,’’ Additional Chief Secretary I S N Prasad said.

Now we are on Telegram too. Follow us for updates
TAGS
bengaluruKarnatakaPubshighwayClosure