Mistress of  herbs saves uteruses from going under the knife

In the city, an Ayurvedic doctor has prevented thousands of women from going under the scalpel.

BENGALURU: Recently a racket involving the removal of uteruses from healthy women in Kalaburgi hit the headlines. In the city, however, an Ayurvedic doctor has prevented thousands of women from going under the scalpel.

Dr Gowri Subramanya, has dedicated her life to educating people about the benefits of ancient Ayurvedic medicines and has treated several women ailing for various issues related to the uterus. She is the granddaughter of Pandith Narasimha Murthy, Palace Vaidya of Mysuru royal family. She resides in Banashankari.

Clients around the World

She has successfully treated more than 1,300 women and prevent them from undergoing needless surgeries. Not only people in the country, she boasts of patients even from abroad, from countries like Australia and USA. 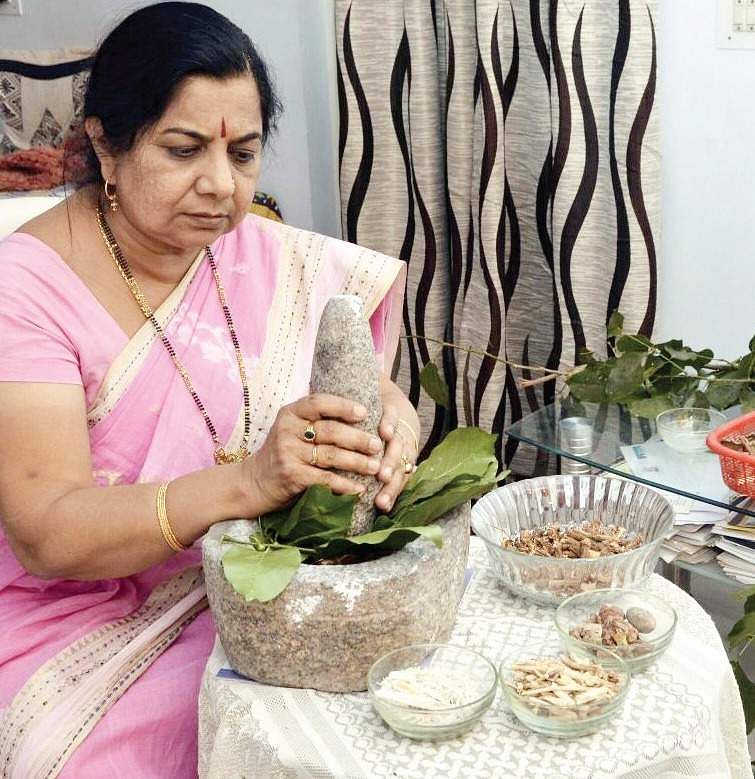 Highlighting some of the main reasons for women having  such problems, she attributes changes brought about due to modern lifestyle that lacks in physical exercise and activity combined with stressful jobs and long hours of work in one place.

All these result in Polycystic Ovary Syndrome or PCOD, she says.

Most of the time excessive bleeding are misdiagnoised as cancer and hence removal of the uterus is suggested by doctors, she says.

“Removal of the uterus is suggested only in the extreme case. A majority of those who undergo treatment can be cured within 3 to 6 months, depending on am individual body’s response,” adds Gowri.

She says that the roots, stem and seeds of peepal tree (Arali Mara) all have medicinal value and in about 75 per cent of cases women with uterus problems can be cured by the products of the tree. She has also formulated many Ayurvedic medicines on her own based on her 25 years research.

“Most of them who approach me are those who have undergone allopathic treatment and are not satisfied with the results. They come just to try out at first and later express their happiness after their treatment has been successful,” she says.

There are instances where women with problems related to the uterus have approached Gowri just a week prior to going under the knife that prevented them from unndergoing the painful procedure.

“Women should not ignore any minor changes in health, specially those who are above 40. Self mediciation and ignorance is very dangerous and leads to other problems, so the best solution is to get it cured at the initial stage. If they come in the initial stage they can be more benefited,” she says.

She says that in most cases the failure to properly diagnose the ailment is a major issue. “People should first develop faith in the efficacy of the ancient medicines. There are several instances people with several serious health disorders have got cured in Ayurveda,” adds Gowri, who has also arranged several medical screening camp spending her own money.

Bhagyashree, 49, is a resident of Thyagaraja Nagar and one of Gowri’s patients. She says, “I was suffering from polyps, cyst and continuos periods for nearly two months. Doctors asked to undergo laparoscopy surgery. When I took the medicines for four days, I experienced uneasiness, vomiting.”

Meantime a friend referred Gowri’s name and following her treatment, her condition has improved.
Roopadevi, a resident of Mysore Road who has obtained treatment for uterus cancer says that her allopathic doctor had asked her to go for a uterus removal procedure in a week’s time.

Instead she went to Gowri and claimed great improvement in her condition. “Just after a month, there was tremendous improvement in my health and for the past eight years, I am leading a happy life and I have no problem.’   Renowned Ayurveda Gynecologist Dr Nanda Pai from Karkala says that removing uterus has become a big money spinner with doctors today.