The Rajagopal Nagar police inspector shot at a 24-year-old rowdysheeter who attacked a sub-inspector with a machete in the early hours of Wednesday.

BENGALURU: The Rajagopal Nagar police inspector shot at a 24-year-old rowdysheeter who attacked a sub-inspector with a machete in the early hours of Wednesday. 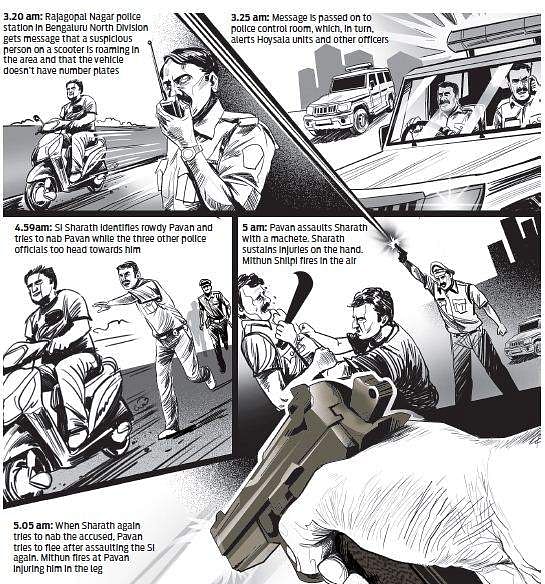 The injured rowdysheeter, identified as Pavan, is involved in at least 20 cases, including robbery, dacoity and chain snatching under Rajagopal Nagar police limits.

A senior police official said, “Around 3.20 am on Wednesday, they received information about a person carrying a weapon and riding a Honda Activa scooter which did not have a registration plate. The police informed the control room and three teams of two members each went in pursuit.”

Around 5 am, police found out that Pavan was on Chowdeshwari Nagar Main Road. Sub-inspector Sharath went there with a team to nab him. By then, Inspector Mithun Shilpi too reached the spot and asked Pavan to surrender. In a bid to escape, Pavan attacked Sharath following which Mithun shot him in the leg.

Pavan and Sharath were taken to Victoria Hospital for treatment. Police said both are out of danger.

“We have registered a case against Pavan for assaulting an on-duty official and will question him once he recovers from the injury,” a police official said.