BENGALURU/ MYSURU  : CITY residents got the much-needed relief from the searing heat with a drizzle on Monday evening. They were pleasantly surprised as the negligible rainfall coupled with overcast conditions and moderate winds resulted in a significant drop in the rising mercury level, which was troubling them for past few weeks.

Jala Hobli in Bengaluru North received maximum 35.5 mm rainfall in Bengaluru district. Other parts of the city, including Dodda Jala, Radhakrishna Temple Ward, Doddabommasandra, Shettyhalli, Bagalagunte and others received light to moderate showers during the evening. 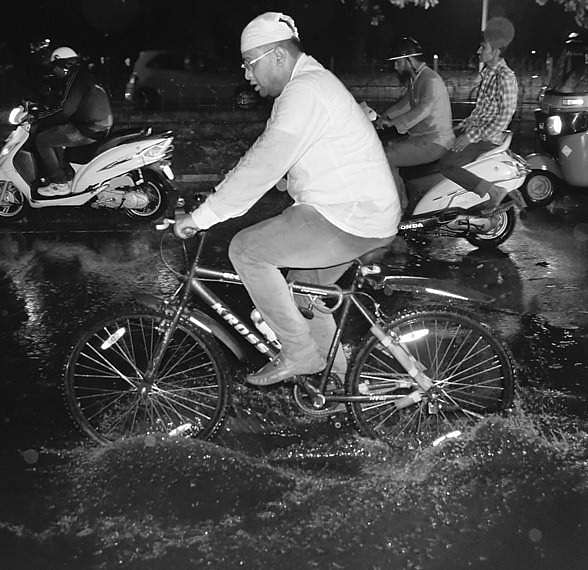 Meanwhile, several parts of south interior Karnataka also received moderate to heavy rainfall for the second consecutive day on Monday. The first spell of pre-monsoon showers of the season, which began on Sunday, is expected to continue for at least one more day. Rains accompanied by thunder and lightning claimed two lives in Tumakuru.

The rainfall recorded in Bengaluru Urban, Bengaluru Rural, Mysuru, Chamarajanagar, Tumakuru and other districts has been attributed to the upper air circulation over Arabian Sea. The highest 84 mm  rainfall in the State was recorded at Kattekere near Hunsur in Mysuru district.

The region is expected to receive showers on Tuesday too.
Rain respite for fire-ravaged Bandipur, Nagarahole forests
The fire-ravaged Bandipura and Nagarahole got some respite as parts of the forests received rains during the last three days. There was light to moderate rainfall from 30 minutes to two hours, starting from Saturday and the forest officials hope to get more rain in the next few days.

In Bandipur, there were rains in parts of Bandipur, Moolehole, Hediyala, Gundre and Kundgere ranges. However, N Beguru which was severely affected by fire received no rain.  In Nagarahole, Metikuppe, Kallahalla and Antharasanthe ranges received sporadic rains. Nagarahole Conservator of Forests S Manikantan said these rains will help in arresting forest fires.