A current student of National Law School of India University (NLSIU) and a 2015 alumna have got admission into the LLM (Master of Law) course at Yale University.

BENGALURU: A current student of National Law School of India University (NLSIU) and a 2015 alumna have got admission into the LLM (Master of Law) course at Yale University. 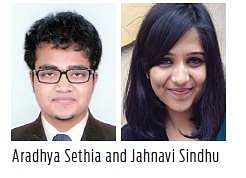 The varsity, along with Harvard, Oxford and Cambridge, is one among the eight Ivy League universities. The course is also one of the most selective ones as it has only 24 seats. Aradhya Sethia (22), a final-year student of NLSIU, is also one of the youngest candidates to get selected for the course. He eventually wants to work in the policy sector in India and wants to evolve mechanisms which will improve the legal institution.

He said, “I don’t want to become just a litigating lawyer to fight cases but actually work towards improving laws and the different aspects of the justice system.” He is a native of Jeora in Madhya Pradesh’s Ratlam district.
Jahnavi Sindhu (24) is the other person to get admission to the course. She currently works in the Supreme Court as a clerk.
Prof Venkat Rao, Vice-Chancellor of NLSIU, said Aradhya’s selection was a matter of pride for the university. He added that Aradhya had been one of the best students of his batch.