Friendship is a chewy, chocolatey cake

BENGALURU: Bengalurean couple has started an inspiring and global campaign for inclusiveness. Parents of a seven-year-old, who has a condition that falls under the Autism Spectrum Disorder, have set off an online trend with their emoticon – called the Supporticon – and #baketosupport. 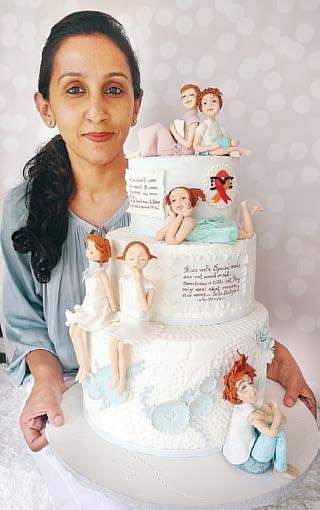 Geetha VR, a former advertising professional, was getting tired and anxious about people’s reaction to her son’s behaviour in public spaces like restaurants. “My son Om has a condition that falls under the Autism Spectrum Disorder. In fine dining restaurants, when they play soothing music, it is a sensory imbalance for him. He may scream, bang the table or jump,” she says.

“Others in the restaurant used to tut-tut or look at us with sympathy, which I hated. I thought people were being arrogant and started getting worried that I may not be able to take him anywhere.”

One day Geetha gathered the courage and walked across to a group of annoyed guests and told them that her child has a condition and asked if they could be understanding. “They were very accepting,” she says. “I realised that it was ignorance and not arrogance that caused their earlier behaviour.”

She discussed with her husband Ratheesh P Subramaniam, also an advertising professional, and they decided to encourage inclusive friendships and start a drive.

Ratheesh came up with the Supporticon, which is one smiley leaning against the other.

Smile for a Smile
“A special child or a physically challenged person would break into a smile because someone has reached out in friendship and the other person would smile because they have made a special connection... one smile will support the other,” she says. The Supporticon logo has a ribbon running through the two icons. “The ribbon is to show a connecting bond between both the souls,” says Geetha.
The Supporticon was launched with a video for which Geetha reached out to Om’s school for help. “We asked his principal Santhi Karamchetti to put us in touch with special children and their parents, and she readily helped,” says Geetha. The Spastics Society of Karnataka also joined forces.
The icon went viral with people taking selfies with their new friends, seated back to back, and posting it on the Facebook page.

Baking Starts
Then Geetha’s school friend Mary Ann George, a baker, pitched the idea of #baketosupport. This was to get women bakers to bake a cake and gift it to a specially abled child or person. Mary Ann says, “I have seen the many obstacles families with special children face and I wanted to do my bit to raise awareness... I am a baker and cakes are how I express myself better. So I thought of the  #baketosupport campaign and approached all my baker friends who readily agreed.” They were asked to include the Supporticon on all their contributions.

Nirmala Arokia, a pastry chef at Pumpkinbakes in Jalahalli, says her best is Belgian chocolate cake “followed by banana caramel cake”. Nirmala baked her best Belgian chocolate cake with coffee buttercream and Ferrero Rocher crunch for Shalini Saraswathi, who is better known as the city’s blade runner. “Shalini, who is my sister’s childhood friend, was a perfectly normal young woman where at the age of 32 she lost both her arms and her legs to an infection,” says Nirmala. “Her entire world came to a halt, people thought she would be bedridden for life, even asked her husband if he would remarry. But unlike any other, she rose above all of this... she leads a regular life and trains with an athlete to run 5K and 10K marathons... that is what I call a comeback. She is my biggest inspiration and role model.”
The lower tier of the cake has a pair of crutches, seemingly left behind, and on the upper tier is a girl flying away on golden wings.

Moving Experiences
Ashel Sandeep, a cake artist at Ashel’s Baking Heaven in Whitefield, took a three-tiered cake to her neighbourhood school for disabled children. “I thought I knew of all the problems faced by a special child or their parents,” she says, but working on the cake made her realise how much more there was. “It was a very emotional and educative experience... (through the cake baking and sharing) I could talk about it to a lot of people.”

Diya Haldipur gifted a choco-vanilla, two-layered fondant cake to an NGO, which she picked through an Internet search. Founder and cake artist at Itsy Bitsy Bytes, a home-baking venture in Malleswaram, Diya specialises in fondant cakes with edible toppers.

“(In the cake) I added edible toppers that showed two sets of friends where ‘special needs’ didn’t matter in ‘friendship’,” she says. She also added the wordings “The ‘special’ friendship recipe - A pinch of patience, a dash of kindness, a spoonful of laughter and a heap of love”.