An American Jew, dressed in kurta with a kasavu neckline, takes the asana position as a group of music enthusiasts and curious Bengalureans sit around him on the floor.

BENGALURU: An American Jew, dressed in kurta with a kasavu neckline, takes the asana position as a group of music enthusiasts and curious Bengalureans sit around him on the floor.

“Kripya aagya dey”, mouths Joel ‘Veena’ Eisenkramer as he tunes his Indian slide guitar, which he got made for himself from an artisan in Kolkata. Joel plays raag Yaman, an evening raaga. He explains to the audience how the raaga is a combination of 'Jor' (pulsating music) and 'Jala' (sparkling and fast-paced notes).

Born in Brattleboro, Vermont in the US, Joel was taught raag Yaman by his guru Dr Ranjan.
So, how does an American end up playing Hindustani music on an Indian slide guitar and manage to find an audience in Bengaluru? Well, it all started on one July afternoon in Mussoorie. “I was there on a programme to study Hindi literature. While I was walking around one day, I noticed a music CD by Pt Vishwa Mohan Bhatt and saw the Indian slide guitar on the cover,” he says. 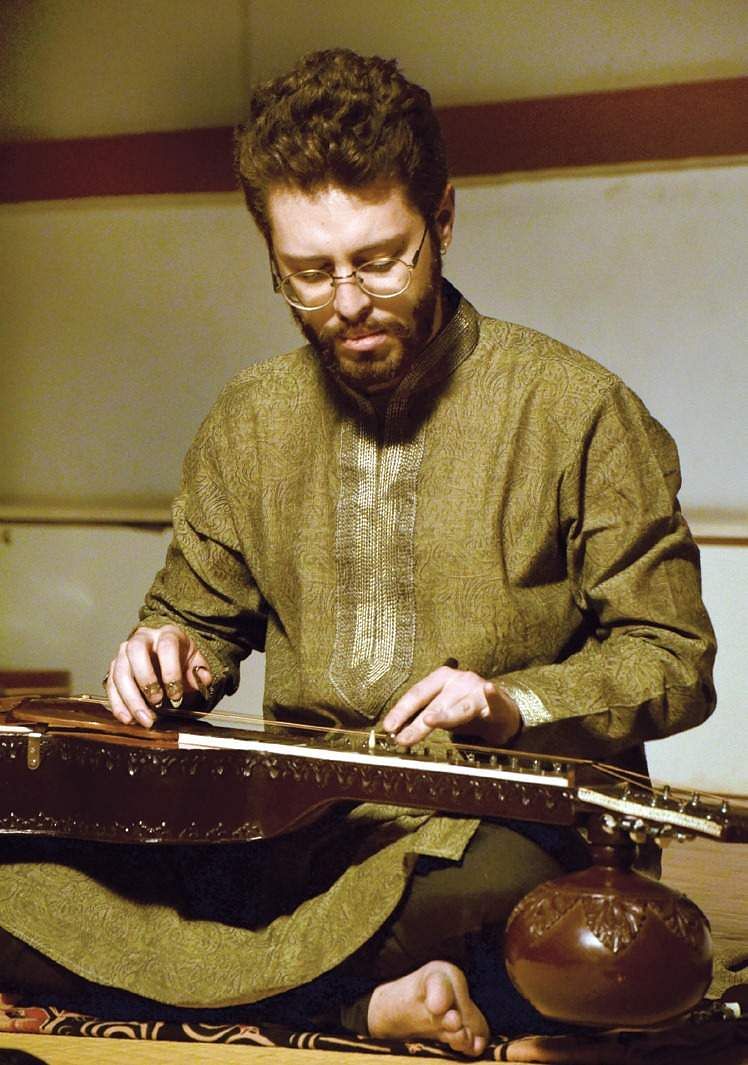 Joel had never seen an instrument or heard a similar sound as one on the CD ever before. “I was captivated and decided that I want to learn to play this instrument,” he says.

In his search for a teacher, Joel reached Delhi University, where he met Pandit Subhash Nirvan, who claims himself to be the greatest tabla player, notes the American.

Pandit Subhash introduced him to Dr Ranjan Kumar, who eventually taught him to play the instrument. “He always taught me the full form, whether I could match him or not during  classes did not matter,” recalls Joel.

Following raag Yaman, Joel plays the same raaga in “teen taal”, which is a cycle of 16 beats. As he plays, the audience remains rapt in attention.

“My teacher is a purist,” he says, adding, “He wanted me to practise four hours before coming to the class. Coming from the West, the whole concept was unthinkable to me, but soon I learnt that in Indian classical teachings, most work is done by the student. The teacher just shows the path”.

Joel says that Dr Ranjan could always tell if Joel had fallen short on practice. “I don't know how, but he always knew. He could tell I had practised for just 2 hours that day or less,” he says.

The days Joel came in with lesser hours of practice, he would just have tea and listen to his teacher play in that class. “I would then go back and finish my practice for the day,” he says.

Joel then plays raag Jog, in Dr Ranjan's composition. The music is similar as the blues scale of the West.
In his six-month long study programme in India, he completed his thesis on Hindi literature. “It wasn't my best work, but my Indian slide guitar stint was going well,” he says.

Following this, Joel would travel from Vermont to Delhi each year to complete his classes with Dr Ranjan. “As I improved, I wished to perform and my teacher asked me to go for it,” he says.
In the following months, Joel started performing the Indian slide guitar at yoga classes, alternative summits and weddings in the United States. “I was still shy of playing in Delhi. People there know a lot about Hindustani music,” he laughs.

Soon, Joel started jamming with Gordon Korstange, who too had been leaning towards Indian music. Based in Vermont, Gordon first travelled to India as part of the Peace Corps in the 1960s. At that time he started to study Carnatic music and the bamboo flute.

“We met about three years ago through a mutual friend and began exploring ways to share our musical experiences and create a meaningful fusion between the two,” recalls Joel. Gordon is a retired school teacher and a published poet.

He plays Bhagyada Lakshmi Baramma that he learnt from his jamming sessions with Gordon. At this point, a few audience members are tapping their thighs with palms, nodding along in appreciation of his performance.

Joel then talks about a composition he made on the instrument. It was for a wedding, he says. “A Jewish man and a Hindu woman were getting married in the US. They approached me for a composition to be played at the wedding. That's how I came up with The Peacock,” he says.

Joel started playing guitar at the age of 10 and today, at 30, has an album out. All the compositions on the album are played on the Indian slide guitar. His album - Unexpected Blessings is available on  iTunes, Amazon, GooglePlay and BandCamp. Joel recently performed at “Taleem Yatra: The Story & Music of Joel Veena” at Shoonya - Centre for Art and Somatic Practices in the city. The programme was organised by Gathr, in collaboration with#HouseConcertBangalore.