Want to be a star? try being alia bhatt

BENGALURU: Live a star-studded life in Alia Bhatt: Star Life, a life-simulation game.
Supported by the actress, the game takes you through different Bollywood experiences including fame (if play the game right)

Mark Skaggs, co-creator of the once wildly popular game Farmville and moderately popular Cityville, created this game too. In a conversation with City Express, Skaggs who was in the city says, “This genre of game is popular across the world. So, we thought of making a great game with Indian content.

It is a life-stimulation game. It is a story-driven experience where you are a character, male or female, who aspires to become an actor in Bollywood. It includes going to gyms, dance studios, auditions, photoshoots and doing films, something that Alia experiences including dealing with gossiping by other actors. Alia is your friend and mentor.” 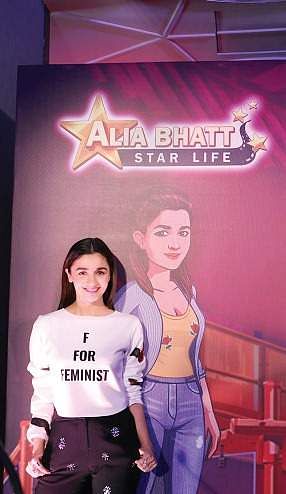 Ask why they chose Alia Bhatt and Tanay Tayal, co-founder and director at Moonfrog Labs says, “We were trying to get as large an audience as possible. Bollywood was the answer given the size of the market. And Alia is the youth icon... one of the most popular actresses across India. She is an actual fit for someone who stands for what she believes in. She is an extremely talented actress and a lot of people look up to her.”

She’s been active in helping us with the game, says Tanay, adding, “Also, when we were speaking to her, she understood what we were trying to do and how powerful a medium games are. She was really on the spot about how the game would work.”

Play Forever
It’s a never-ending game. “We add new content every week. A lot of it will depend on what people are liking and the storylines that are working. We will take those and develop them further,” Tanay says. Mark adds: “They may run into situations like a gossip columnist who is trying to get them to say something or bagging roles or other few common experiences that Bollywood fans read about.”

There are 15 characters in the game which the players interact with and they could be your manager, publicist or a director. You may choose not to do what they suggest but following their leads would help you progress to different levels quicker.

Getting Eyebrows Right
Developing Alia’s animated character was a challenging task. Mark says, “It took a couple of months just to develop her face.

Her face is so expressive. We looked at different photographs of hers and all had different expressions. We had to also get her clothing right. Sometimes, we would have conversations in the office like her eyebrows are little too dark. It was challenging but fun.” Launched on March 16, the game is available on Android and iOS.