The Bahmani rulers, who presided over the Deccan for almost two centuries, left a lasting legacy in art and architecture. Another legacy is of coins and the Sultanate’s rule is indeed any coin collector’s delight. Mohammed Ismail will vouch for that.

KALABURAGI : The Bahmani rulers, who presided over the Deccan for almost two centuries, left a lasting legacy in art and architecture. Another legacy is of coins and the Sultanate’s rule is indeed any coin collector’s delight. Mohammed Ismail will vouch for that.

Ismail, who works in the sub-registrar office of Kalaburagi, has a repository that includes coins collected from different dynasties and eras, including of foreign countries. But his collection from the Bahmani Sultanate is closest to his heart. 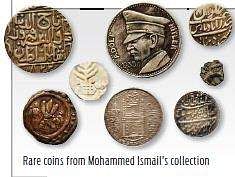 Ismail says his interest in numismatics was kindled in childhood when fakirs (Muslim ascetics) would come wearing necklaces of old coins. He would coax them to part with the coins for a sum. Soon he began to collect them from scrap dealers and later visit coin exhibitions to buy them. “I began to collect coins when I was 14,” says Ismail, adding that the passion only grew with age.

So far he has invested over Rs 6 lakh on his collection. “Earlier I used to collect the coins and dump them in the house. Later I came in contact with Mohammad Ayajoddin, an artist and also coin collector. I learnt from him how to collect and display the coins with inscription,” says Ismail.

Ismail is also researching on Bahmani Sultanate. Ismail says he spends an hour daily and three hours during holidays for his research work.

A coin brought out by Raja Venkatappa Naik of Bedara Nayak community who ruled a small kingdom of Surapur (currently in Yadgir district) under Nizam dynasty is perhaps a symbol of secularism.

On one side is  hymn to Venkateshwara, the family deity of Naik, and on the other side is an image of Bahari Dargah of Surapur. Ismail also has a hook coin, belonging to the era of Ali Adil Shah II (1657 to 1672) of Adil Shahi dynasty of Bijapur.

Ismail plans to hold an exhibition of old coins in Kalaburagi. He has another interest too: studying the evolution of Kannada under the various dynasties.