An online series, in water colour and digital media, on mental disorders started by a Bengalurean artist.

BENGALURU:Bengalurean Sonaksha Iyengar has started an illustrative series online titled “A-Z of Mental Health”, to initiate conversations on chaotic emotions and the health condition. Excerpts from an interview.

What made you start on this series on mental health?

Often, since mental illnesses and disorders are invisible, they are not acknowledged and sometimes even ridiculed. After having numerous conversations with friends about the stigma associated with it and facing difficulties with the way people approach the subject myself, I really wanted to create something tangible to start a conversation. Sometimes words can be hard to describe the chaos that the brain feels like - whether it is a bundle of emotions or a mental disorder. The hope is that everyone knows that they are not alone and that their struggle is acknowledged, whether it is someone who battles their mental health everyday or a caregiver watching someone go through it.

How do you pick the mental health conditions you paint about?

I would love to illustrate all of them but since there are limited alphabets, I have to choose everyday.

I spend time reading various forums for mental health, collaborating the discussions people are having and experiences they are sharing and finally narrow it down based on issues that I want to address immediately. Some of them are well known but also end up being on the receiving end of a lot of myths that need to be busted and some disorders/illnesses that people aren’t aware about and the hope is that they won’t dismiss it the next time they hear of it. However, I do hope to continue illustrating them even after I’m done with Z and do as many as possible. 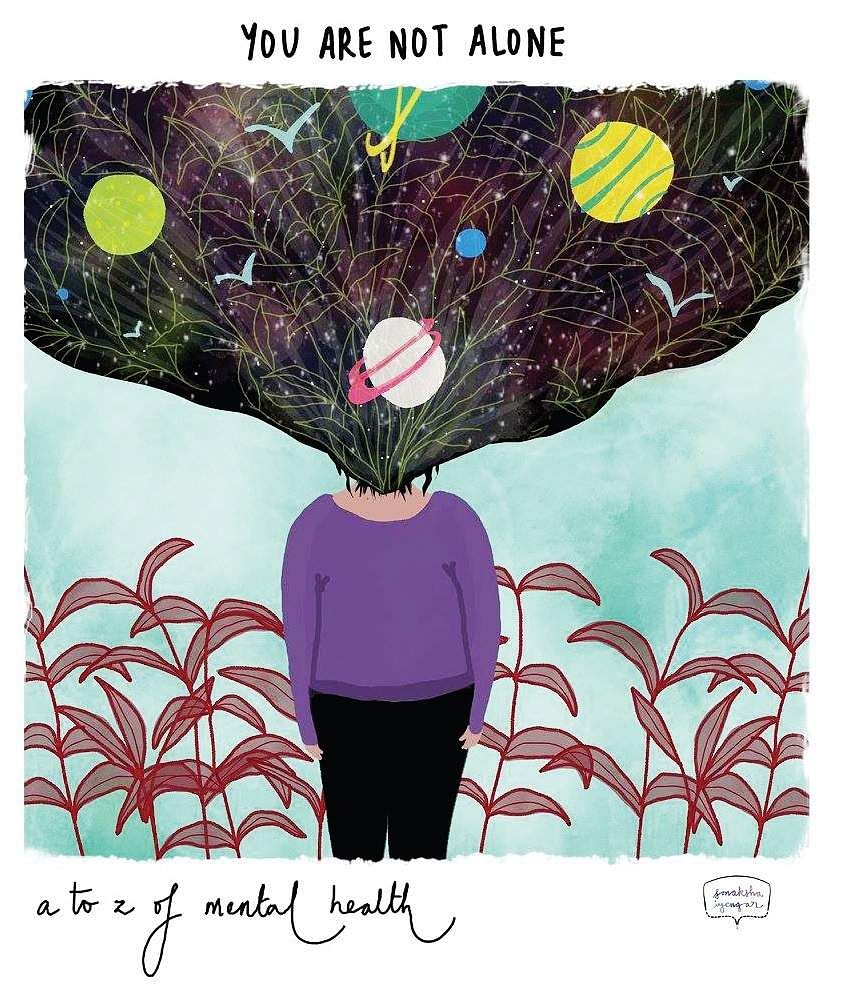 What do you hope to convey to the audience? It seems like an experience but there is also text, so is it also meant to be educative in a way?

I have had my own struggles and experiences with mental health and illnesses and they have always made their way to my work - whether it is writing or illustration. It is time to have honest conversations with each other about the importance of mental health. There are many layers to what I hope people will take out of this. Some of them are:
It is really disheartening to see people make assumptions about mental health, illnesses and disorders. We hear things like “Get over it”, “Stop asking for attention”, “Liars”, “It’s just a phase” all the time and it is really unfair to make such statements that are so hurtful to anyone having a hard time with the chaos in their head.

Awareness will help us make a start in the right direction towards kindness and empathy. So with the series, I hope to address mental health using a combination of mental disorders and illnesses with emotions that a lot of us perhaps feel in varying intensities.

When you’re struggling with your mental health it is really hard to answer “How are you” questions because you never really know. So I hope that I’m able to reach out to people who are fighting these battles with their health every single day and living through them and to tell them that they are not alone. There’s some kind of comfort in knowing that there’s someone else who is at least making an attempt to understand how you feel. Also, hope people will spend at least a few minutes of their day reading up about these topics and engaging in discussions with each other about them.

The images seem like a glimpse of the experience of the illness itself. Do you talk to people who are living with a condition before you paint them?

I would love to in the future be able to work on such a project that stems out of interaction and collaboration with people living and fighting these battles everyday. But, for #atozofmentalhealth I’ve browsed mental health forums, read experiences, stories and in cases where I knew someone who was struggling with a certain emotion or disorder, I spoke to them to understand it better. I’m aware that it is difficult to explain these things unless you are actually feeling it, so I’m not trying to be the voice of the people living these conditions, but I’m hoping to make an attempt into understanding what we know of it so hopefully we can all be aware and approach these subjects with warmth and concern.

What is your medium?

For this series I’ve used a mix of watercolour and digital media.

What is the reaction you have got so far?

I’m truly moved by the kind of responses people have had so far. People have sent in direct messages sharing their stories and telling me how touched they are that I was able to highlight aspects of their illness that no one understood. That for me is the best possible outcome.

We can’t even imagine the gruelling challenges that so many people are going through everyday. And for an illustration to be able to help them feel comforted for even a few moments is truly heart warming to say the least. I feel so much pain to hear these stories and struggles but also hope that we are able to share it through art and find relief.

Do you think using text on images takes away from the image itself?

I thought about this a lot before beginning the series. I was initially thinking about just going with the images but the aim was to also increase awareness and bust some common assumptions that are wrongly made by people when they hear these terms. So it was important to have text on the image in order to get this message across even if people didn’t spend time reading the long captions that go with each of them.

However, I do plan on adapting #atozofmentalhealth with only specific images minus the text if required, for people to be able to hold in their hands and have in their homes/clinics. I’m looking at logistics and production right now but hoping to work it out soon.

Which artists are you inspired by?

I think particularly in the space of mental health, I love the work that Jessica Walsh and Adam J. Kurtz are doing.