This script lands from Iran, but only after the actor steps on stage

‘White Rabbit, Red Rabbit’, a theatre act by Iranian playwright Nassim Soleimanpour is peculiar for being a play with no director or rehearsed script.

BENGALURU:  ‘White Rabbit, Red Rabbit’, a theatre act by Iranian playwright Nassim Soleimanpour is peculiar for being a play with no director or rehearsed script. It is staged with different actors each time and will be staged for the fourth time in Bengaluru in one-year’s duration.

In September 2016, the play was enacted by Arundhati Nag. This time it is Bengaluru- based actor and director Deepika Arwind’s turn. 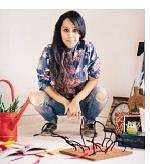 The actor, like the audience , will not know the course of the play beforehand. Deepika says  she has no idea how it will unfold so besides being curious and excited, she is cluelessly gearing up for the play.

She keeps up with her daily regular practice of voice and sounds prior to opening a sealed script on stage on March 29 at The Humming Tree.

Around 70 people had watched the show in March 2016 held at Ranga Shankara performed by Pritam Singh. Deepika has not enquired about the play. “We are not supposed to know about the plot, but I have heard it is interesting,” she shares. Forty-eight hours before the actor performs, he/she is sent just two instructions.

First instruction states “Do not see or read the play beforehand. Learn nothing about it,” the second instruction reads “prepare an ostrich impersonation.”

Soleimanpour wrote the play in 2010 when he was forbidden to leave his native country Iran for refusing to take part in the mandatory military service for all Iranian men. In 2013 Soleimanpour got his passport and watched his play for the first time in Brisbane.

Ever since the play’s premiere in 2011 at Edinburgh, the act has been translated into 15 languages and have been performed over 200 times by actors including John Hurt, Simon McBurney, Stephen Rea, Sinead Cusack, Marcus Brigstocke and Ken Loach.

Even though the play had a five-day run-off in Jagriti theatre in 2014, it was actually performed last year. The play is about 70-90 minutes depending on the actor.