November 6 was the deadline for BBMP to fill the potholes and the civic agency claimed that 98 per cent work had been completed.

BENGALURU: You are probably reading this while you brace yourself for yet another back-breaking ride over the city’s potholes. November 6 was the deadline for BBMP to fill the potholes and the civic agency claimed that 98 per cent work had been completed. But a drive on any stretch will tell you that this figure is way off the mark: Areas like Hongasandra, Begur, Gandhinagar, Bannerghatta Road, Johnson Market, Dairy Circle, Sahakaranagar and Uttarahalli Main Road are still dotted with big holes. Four deadlines have come and gone. A lot more needs to be done on the ground though many stretches have been patched up. “At Begur Road near Electronic City flyover, there are too many potholes. 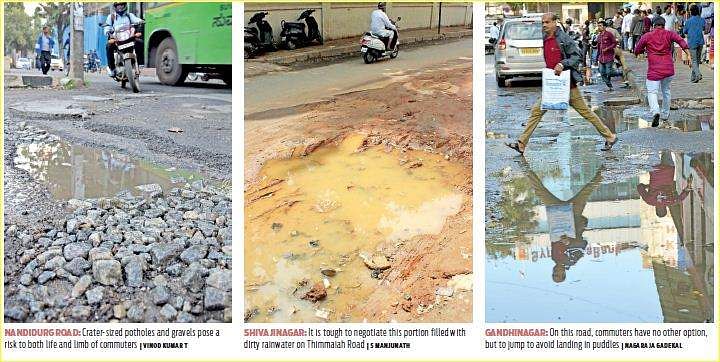 It is dangerous to drive on this stretch. With too many potholes, the road turns into a river whenever it rains. We complained to the officials several times, but in vain,” said Bhaskaran, a senior citizen and resident of Hongasandra. Sanjay M T, a techie with Honeywell, said: “Bannerghatta Road, which connects to Bommanahalli and several IT firms, has many stretches that are pockmarked with potholes. They lead to traffic jam and cause huge inconvenience to commuters, e s p e c i a l ly office-goers.” With Monday being the D-day (deadline day), BBMP engineers were seen struggling to fill the potholes in the city, after missing three deadlines in the last one month.

BBMP Commissioner N Manjunath Prasad has warned that if potholes are seen on the city roads after November 6, action will be taken against the chief engineers and ward engineers concerned. On October 9, Chief Minister Siddaramaiah, who conducted a review meeting with the BBMP top officials, set a 15-day deadline for the civic body to fix the potholes. When that deadline couldn’t achieve much, he extended it to November 6, with a warning that engineers will be held responsible if potholes existed after the deadline. BBMP Engineer in Chief M R Venkatesh told Express that 98 per cent of pothole filling work is completed. “Even on Monday, officials are getting the potholes filled in Yelahanka and other zones of the city. We are confident of meeting the deadline,’’ he said.

He also added that zone chief engineers, ward engineers and major road engineers may be pulled up as per Siddaramaiah’s instructions. “We are not bothered about the number of potholes, but our focus is on making all stretches pothole-free,” he added. One of the engineers from West Zone told Express that they have been working day and night to fill potholes, irrespective of the weather conditions.

“We are working even on holidays and weekends. Due to continous vehicular movement, potholes are resurfacing on some roads. Some roads need to be totally relaid,” the engineer said. Another engineer added: “The Chief Minister is likely to conduct an inspection of the roads this week. So, we don’t want to take any chances.”

Now we are on Telegram too. Follow us for updates
TAGS
BBMP potholes Bengaluru roads