A considerable number of the nearly 3,500 site allottees who lost their sites in Arkavathy Layout due to denotification were senior citizens.

BENGALURU: A considerable number of the nearly 3,500 site allottees who lost their sites in Arkavathy Layout due to denotification were senior citizens. Having invested much of their savings on these properties, they’re still making frequent rounds of the BDA office in the hope of some respite.
Their struggles are exemplified by the stories of two individuals. After six attempts since 1983, Kandagol was extremely happy to get a BDA site allotted in 2006. However, 11 years later, he is very distressed about the fact that his site had been denotified. This 70-year-old’s dreams of building a house on the site were never fulfilled and he continues to live in a rented house. A native of Ilkal taluk in Bagalkot district, Babusab Kandagol had paid `2,26,750 for a 30x40 site in Srirampura area which falls under 8th Block of Arkavathy Layout. “I paid all the money I retired rom the National Cadet Corps,” he said. The land had been registered in his name with the encumbrance certificate also issued. “I have been paying the property tax regularly from 2006 till 2013. I never received any tax challan from BDA after that.” Kandagol went to the spot to checked the site. To his shock, he learnt that it was barricaded with zinc sheets. “I learned, orally from the R T Nagar BDA office about my land being taken back by the government. I received nothing in writing from BDA. I applied for an alternative site on August 26, 2013. I still haven’t got it.” Last month, Kandagol got a challan asking him to pay `3,200 towards property tax for the last four years and he complied. For the past 2.5 years, he had been frequenting the BDA office every alternate Wednesday hoping for some good news. Having suffered a severe injury one-and-half years ago, he is forced to take an auto or cab for the trip to BDA. “It is such a mental torture. I have lost my peace of mind ever since the loss of my site, ” he added.

Similar is the story of H R Dayanand of Srinagar, who retired as Assistant Director from the Agriculture department. In November 2005, he was allotted a 30x40 site in Arkavathy Layout 5th Block in his seventh attempt for a site. He had paid around `2,50,000 at that time. “I was 51 years when the site was allotted to me. Today, I am 63 and I am still struggling to get an alternative site after the denotification in 2014. I had paid over `500 annually as property tax,” Dayanand says. What rankles him is that he did not have possession of the site when he really wanted it. “I wanted to gift it to my daughter for her wedding. But by that time, my site was taken back,” he says. “The value of my site would be around `40 lakh now. How can BDA do such a thing?” Dayanand questioned. 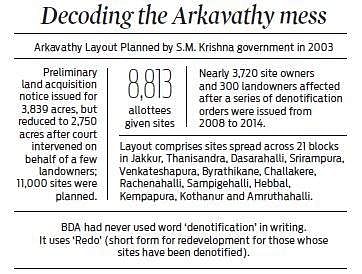