Gutsy journalist Gauri Lankesh had strong opinions, and stood by them

BENGALURU: Gauri Lankesh was a trenchant critic of right wing politics. Friends and fellow activists remember her as brave person who unapologetically held strong opinions. She edited the weekly ‘Gauri Lankesh’, read for its anti-establishment stand, and was the daughter of poet-turned-journalist P Lankesh, who was known to have rewritten the rules of Kannada journalism. Gauri was often called a ‘Hindu hater’ and she had said in interviews that she was merely furthering her duty of working towards an equal society, dreamt of by B R Ambedkar and 12th century philosopher Basavanna.

Last year, she had been convicted of defamation by a magistrate’s court for an article published in her weekly, which accused two senior BJP leaders of having duped a businessman. She was sentenced to six months in jail and fined Rs 10,000. She was later granted bail. After the judgment, Gauri had given an interview in which she said, “Modi bhakts and the Hindutva brigade want me in jail”.

The journalist has written scathing articles against curbing of press freedom, even during the anti-Naxalite Operation Green Hunt when the press were being issued notices for interviewing Maoists. Gauri had written many non-fiction books in Kannada including ‘Kanda Haage’, ‘Aavarana Emba Vikruti’, ‘Basavaraja Marga’, ‘Kappu Mallige’ and ‘Benazir’.

She was a leading voice in the Baba Budangiri communal conflict, says Cynthia Stephen, an independent activist. “She wanted the site to remain a plural destination where people of all faiths could go,” she said.
Gauri showed up at many protests and demonstrations, says Meera Sanghamitra, national convener of National Alliance of People’s Movements. He had met her a few weeks back at the All India Convention of Student Struggles. “She was energetic as ever,” said Meera, who calls Gauri “a steadfast activist who stood against right-wing fundamentalism”. He said his organisation will demand a judicial enquiry into her murder. 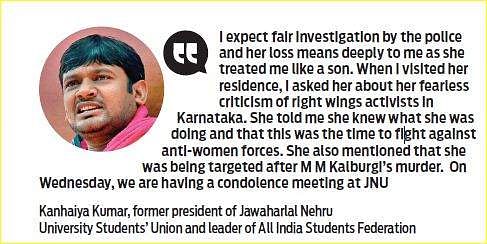 Gauri was known to give moving speeches. “She was a bold speaker, a courageous critic of communalist politics,” said Cynthia. “She held a strong ideological Left position and could give a powerful speech without using any invectives.”She particularly remembers her introducing a book on Kandhamal last year. “Gauri had taken the trouble of reading through it and delivered a highly critical speech against the right wing… how their politics was attacking the idea of India and its plurality,” said Cynthia.

“I hate to say that she will rest in peace,” said Priya Chetty Rajagopal, who had met her off and on at functions. “She was such a fireband in life, I am sure she will be the same in her afterlife. She was a highly intelligent and articulate person. What worries me is that people who are highly driven seem to be at risk.”

Stay up to date on all the latest Bengaluru news with The New Indian Express App. Download now
(Get the news that matters from New Indian Express on WhatsApp. Click this link and hit 'Click to Subscribe'. Follow the instructions after that.)
TAGS
bengaluru murder journalist politics Gauri Lankesh