She was like a mother to me: Kanhaiya Kumar

“I have lost a very supportive figure. She was like a mother to me” - These were Kanhaiya Kumar’s words following Gauri Lankesh’s death.

BENGALURU: “I have lost a very supportive figure. She was like a mother to me” - These were Kanhaiya Kumar’s words following Gauri Lankesh’s death. Their friendship can be guaged by the fact that Lankesh’s picture with the former president of the Jawaharalal Nehru University’s student union has been doing the rounds on social media, with some even using it as their profile picture. Speaking to Express, Kanhaiya recollected the last time he spoke with her. 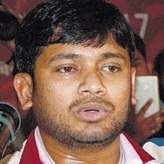 On August 10, he was heckled and his car was targeted by a group of miscreants. Soon after, he had received a call from Gauri. “She called me that day and warned me that the people targeting him “were very powerful.” “She had asked me to make sure I was safe. She was always concerned about my well-being,” he said.  Gauri also fondly called Kanhiya her “bura beta” (bad son), said Kanhiya. “When she called me after the attack, she said I was a bad son because I did not call her frequently,” he added.

Kanhiaya said that he had grown close to her over the years. “I met her for the first time when she had come to JNU. Thereafter, we have been in touch,” he said. “I received a letter from her, soon after I came out of jail. She also bought me a few clothes,” he said even as he refused to divulge details from the letter. “It is something very personal. I cannot share it,” he said. The duo met twice in Bengaluru. Gauri had hosted Kanhaiya at her house on August 4 and 5.

“I was in Bengaluru for a conference. I stayed at her place. She took me out for dinner and introduced me to many journalists and academicians,” he said.  Heslammed the people who have been abusing the slain journalist on social media. He said: “Social media is full of people abusing her. It is so disheartening. This shows that there is no value for life. She got so many Maoists to return to a normal life and this is what she gets in return.”