It is a well-known practice. Get caught for an offence and the offender begins dropping names of the high and mighty to escape the police net. All that should stop, says the Home Minister.

BENGALURU: It is a well-known practice. Get caught for an offence and the offender begins dropping names of the high and mighty to escape the police net. All that should stop, says the Home Minister.
In his first meeting with all the officers deputed in the City on Saturday, Home Minister Ramalinga Reddy told them not to listen to anyone using his name when it came to enforcing the law. “Do not listen to anyone using my name. Whoever it is, do not listen to them,” he said. 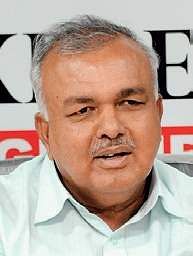 Speaking to officers right down to inspectors, Reddy laid down a list of issues related to law and order as well as traffic and advised them to improve their intelligence inputs and strengthen policing system.
Chief among the list was increased security for women and children. He also suggested that police officials register cases under the Goonda Act against anti-social elements who repeatedly break the law. He added that all top officials, including the Commissioner, should make city rounds at night.

“There are a lot of complaints against those who live in PG accommodations. Many of them party till 1am causing inconvenience to other residents in the locality and this has to be curbed. There are complaints that they get drunk and cause nuisance, especially in south and eastern parts of Bengaluru. I want cases registered not only against them, but also against owners of such PGs,” he said.

Stating that business hours of wine shops must be strictly enforced, he added that people should not be allowed to drink in front of such shops. He also suggested bringing auto drivers under control and have them park in designated areas rather than parking haphazardly on all roads.

He also directed officials to curb beggary at traffic signals, which is turning out to be a menace and also prevent children from being used for this purpose. He told officers that those who worked well would not have to worry about being transferred and could carry on comfortably, while those whose performance was not satisfactory would be shunted out.