Cobra is king in ‘pious’ city

Bengaluru used to have nearly 30 species of snakes, now it has come down to 3 or 4 with people killing them and habitat shrinking ,Cobra has survived the onslaught because of its religious as

BENGALURU:  City is expanding and killing snakes species, the number of which has fallen to 3 or 4 from the earlier 26. But there is one venomous snake population that is thriving – the cobra – thanks to its religious associations. Wildlife rescuers say that they spot this species  almost everywhere now.
People, who run screaming from water snakes in Lalbagh, don’t kill these venomous species but instead worship them. In Indian religions such as Hinduism, Buddhism and Jainism, Naga is a deity believed to take the form of King Cobra.Keerthan Vignesh R P, a wildlife rehabilitator from People for Animals (PFA), says when he goes for rescuing a cobra, he sees a bowl of milk, incense sticks and photo of a goddess next to it. 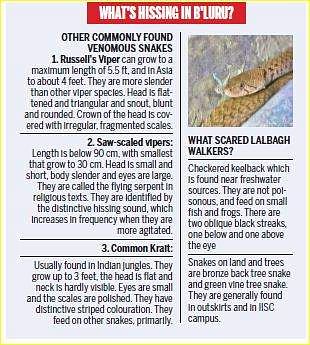 “Last year, when I went to rescue a baby cobra in Rajajinagar, the snake was kept inside a room. The door was locked. A bowl of milk and a photo of some goddess was kept with a lamp outside the door.” An old lady asked him to take the snake after feeding it some milk. It was on the day of Nagapanchami, he adds.

On the other hand, species such as Russell's Vipers aren’t half as lucky. In the city’s outskirts, people stand away from them and even hurt them believing that the snake's odour rots the human skin. “They are considered bad snakes and people usually kill them,” says Keerthan.
“People believe their hands will rot from the breath of these snakes…  It's clearly a myth.” Wildlife rescuers educate people after each rescue, and tell them that every snake is important. “People worry that we may kill them, and ask us not to saying that it is a goddess. We assure them that we are rescuers, not snake catchers,” he says.

Only four species in city
Though religious beliefs and myths are killing rare species, many are also dying out from loss of natural habitat. Once 26 species of snakes could be spotted in the city, but now there are only three or four that are commonly seen, says Rajesh Kumar M, BBMP wildlife rescuer. Rajesh has been rescuing snakes for the last ten years. He says, “Earler, I used to rescue about 15 to 16 species a month, but now that has come down to two or three a month.”

The species such as saw scale viper and green vine tree snake, common krait and Russell’s viper are now found only in the city’s outskirts. R Sharath Babu, wildlife advisor (BBMP Forest Cell), says that snakes that have adapted to these changing conditions have survived. “Like the cobra,” he says.Mohan K from Quick Animal Rescue team, says, “In the city, we have storm-water drains that were earlier covered with stone slabs. So the snakes would sneak in through the gaps and prey on the rodents. But now, they are made of concrete slabs, they find it difficult to get to their feed.” Volunteer with BBMP Forest Cell Mohan says that green vine is a tree snake that lives mainly on banyan trees. Now, due to loss of trees in the city, they are usually spotted only in Ramanagara or Kengeri.