BENGALURU: The state Cabinet on Wednesday approved a Rs 2,095 crore proposal for upgradation of four major roads to ease traffic congestion in and around Bengaluru city and improve road connectivity to Kempegowda International Airport.

Karnataka Road Development Corporation Ltd will take up the upgradation of roads with a total length of 150km under the proposed project, Law and Parliamentary Affairs Minister T B Jayachandra said.
Single lane roads will be upgraded to double lane roads (in each direction). “The upgradation would enable easing traffic burden on Ballari Road to reach the airport and help address traffic congestion in and around Bengaluru city,” he said.

Most of these roads pass through IT hubs such as Whitefield, Electronic City and industrialised areas on Hosur Road, Tumakuru Road and Whitefield Road that see heavy traffic. Upgradation of these roads could help ease traffic to these hubs and to the airport without passing through the city.
The state government is also set to address the traffic woes in tier-2 towns and cities with a project to build ring roads around all district headquarter towns.

The Cabinet has cleared a Rs 275 crore grant to study, survey and prepare a detailed project report to build ring roads around 25 district centres. A committee headed by the Additional Chief Secretary of Urban Development Department has been constituted for the purpose with a time frame of five years to complete the task. 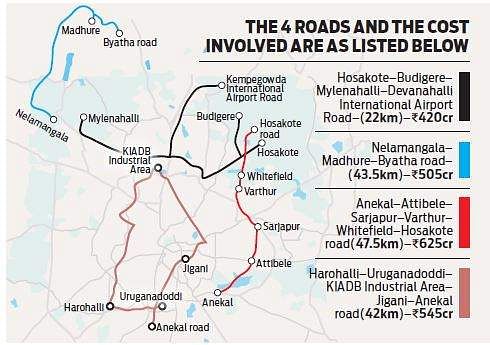 Stay up to date on all the latest Bengaluru news with The New Indian Express App. Download now
TAGS
bengaluruKempegowda International AirportT B JayachandraBengaluru Major Roads