‘Other civic agencies dig up roads, but don’t repair them’

“These are our roads, but there are other agencies which cut and dig the roads often. We can’t tell them not to cut the roads as they too are providing services and facilities to people. But, at the end of the day, it is we who face people’s anger,’’ says BBMP Commissioner N Manjunath Prasad. In an interview with ASHWINI M SRIPAD, he speaks about bad roads and measures initiated to fix them. He has set a 10-day deadline for engineers to fill potholes and repair patches.

After just a few showers, city roads have become bad. Is this because of poor quality?
There are various reasons for damage. It is not only the quality of asphalting, but because of digging by various agencies too.

Does it mean that the contractor will not be held responsible for bad roads ?
Contractors are supposed to repair roads during the liability period. But they take up repair work only if the damage is due to poor quality of work. If it is due to road cutting work carried out by other agencies like BWSSB or BESCOM, the contractors refuse to repair it for free.

In that case, who is held accountable?
We are asking agencies like BWSSB, BESCOM, GAIL, telecom companies and others who damage roads for their work to repair it. But they do not fix the road after their work is done. Roads that are dug up for work are not filled scientifically. The other agencies fill it with cold bitumen that will eventually erode due to vehicular movement or rains. Since these agencies too provide services to people, we cannot say no to road digging. They too have no alternatives to complete their work.

Do they take permission from BBMP before cutting road?
They are supposed to take permission and most of the time they do so. In some cases, where underground drainage or sewage lines, some more than 30 years old, are badly damaged, they cannot wait for permission from us. If they wait, there will be more damage.

Then, who will take up repairs work?
When it comes to concrete roads, there will be no potholes for decades. But if roads are bitumin-mixed asphalted road, there will be a defect liability period, which is usually up to three years. If there is damage to the roads after this period, BBMP undertakes the work. Ideally, the other agencies should do the repair work since the roads are cut by them.

People are blaming the authorities for the bad roads.
People need good roads If drainage or sewage lines have to be laid beneath, roads have to be dug up. Water and sewage get priority over roads. In many places in newly added zones, there is no underground drainage system. People are more worried about sewerage connections than roads being damaged.

What if newly asphalted roads are damaged?
Once the asphalt work is done, our engineers will check the quality, followed by third-party assessment. Quality means thickness of the asphalt layer, materials used etc. If we find that it is not up to the mark, we will not release payments.

Will engineers be held accountable?
That is why we have third-party assessment. If the agency tells us that the work does not comply with quality standards, we can take action against engineers. They can be suspended. If found guilty, action can be initiated.

TenderSURE roads too have been damaged
On some old TenderSURE roads like Cunningham Road, water pipes are beneath the carriageway. Ideally, carriageway should not have any utility. Now there is leakage because of the pipes. The authorities are repairing it.

Did CM Siddaramaiah give any specific directions during Wednesday’s city rounds?
We have started concretising storm water drains. In Bengaluru, there are 842km of drain of which 142 km are concretised. The CM has granted `800 crore for 193km of concretising work. Of this, work on 20km is completed and 60km is in progress. The CM has directed us to complete these works by December

When can Bengalureans hope for the potholes to be fixed?
Starting Tuesday, I have instructed all engineers concerned to fill potholes and complete patch works within 10 days. In fact, our engineers are on their toes and working between 10 pm and 3 am every day. 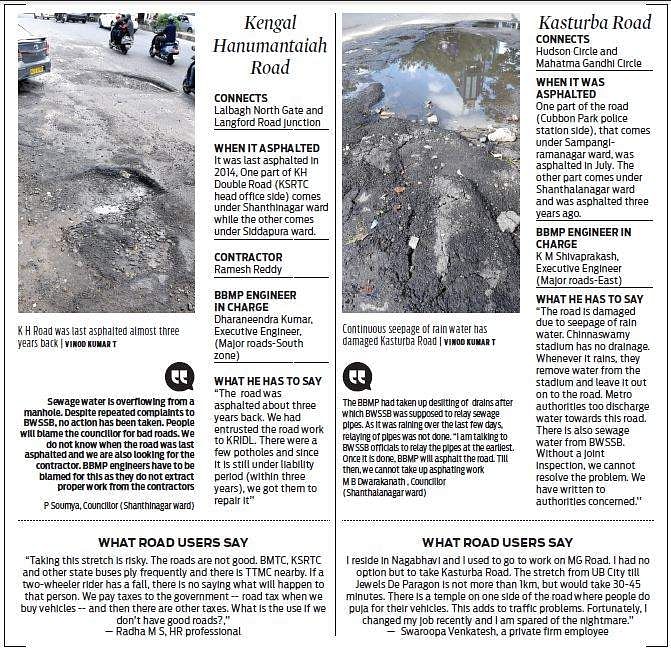