BBMP Commissioner has set a 10-day deadline for officials to fill potholes that have turned into death traps.

BENGALURU: Meeting the 10-day deadline for filling potholes on the city roads is no mean task for BBMP engineers. They are spending their daytime at office attending to other works and the nights on the street monitoring road repairs.The city roads have been in a bad shape following the recent spell of rains, prompting BBMP Commissioner Manjunath Prasad to set a 10-day deadline for his engineers, who are now spending sleepless nights.

The Chief Engineers (CE), Executive Engineers (EE), Assistant Executive Engineers (AEE), Assistant Engineers (AE) and officers of other ranks are overseeing the road repair work.Executive Engineer Shivaprakash K M said they had taken up repair work on Ballari Road after midnight on Wednesday.
“This is one of the busiest roads. One cannot work in the morning and halt traffic in the process. We repaired and relayed roads from Balabrooie Guest House to Hebbal. Work went on till 6 am,’’ he said.
Shivaprakash’s routine has changed now. After attending to his work at the office, this Banashankari resident gets a weather update at 4 pm and starts preparing for the late-night drive to fix roads.

Ditto with AEE Prakash Rao, who works between 11 pm and  4 am.“We took up Banashankari, including KR Road. We will be working along with 20 other people, most of them labourers. The workers who are involved in filling potholes in the night do not come to work in the morning, but we have to be in office,’’ he said.

An assistant engineer, who did not want to be named, said they are working under tremendous pressure to fill potholes. “Everyone in Bengaluru has seen how bad the condition of the roads has become. People are cursing the BBMP. We are being taken to task by our higher officials and elected representatives. If the condition of the roads have worsened, we are blamed, but we are the ones spending sleepless nights. None of the elected representatives ask us about the condition in which we are working,’’ he said.
Another engineer said they had to stand for three to four hours every night.

Dharanendra Kumar, EE (Major roads), said that in his team there are three batches working at nights at various locations in the south of the city.“I inspect sites during the night. I am usually home by 6 am,’’  he said. Another engineer, Uday, said he had no problem working nights. “After all , we are government servants,’’ he added.

Commissioner gets daily updates
Palike Commissioner  N Manjunath Prasad said he gets real-time data on the repairs on a daily basis. “I have given them 10 days. If it rains in the night, it might take two more days. Our engineers are leaving no stone unturned in repairing the roads,’’ he said. When asked about the quality of the work,  the Commissioner said, “We area using a hot mix. It’s not like cold mix or mud, so it will stay longer.” 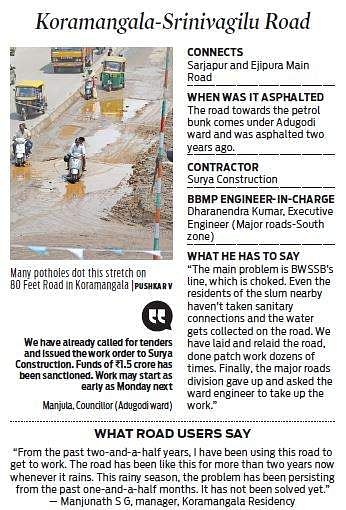 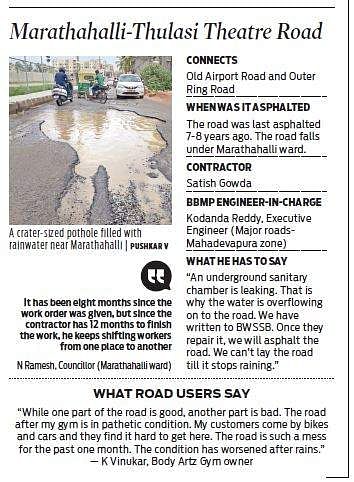 Stay up to date on all the latest Bengaluru news with The New Indian Express App. Download now
TAGS
potholesbengaluruBBMP Engineers