​With his innovative prosthetics​, Dr ​Dayaprasad G Kulkarni​ and his NGO have enabled over 400 people who’ve lost limbs get a grip on their lives

BENGALURU: Ekam Kumar was only 21 when he lost his hand in an accident while working in a factory in 2013. Neither he nor his family could afford a prosthetic, which would cost anywhere between `2 lakh and `50 lakh. “I thought I would live this way for the rest of my life. But then there was a medical camp in my village and that changed everything,” says Ekam, a native of Narsinghpur district in Madhya Pradesh. At this medical camp, Ekam was promised a prosthetic, free of cost. Today, he has his life back on track. “I can even ride my scooter,” he says. 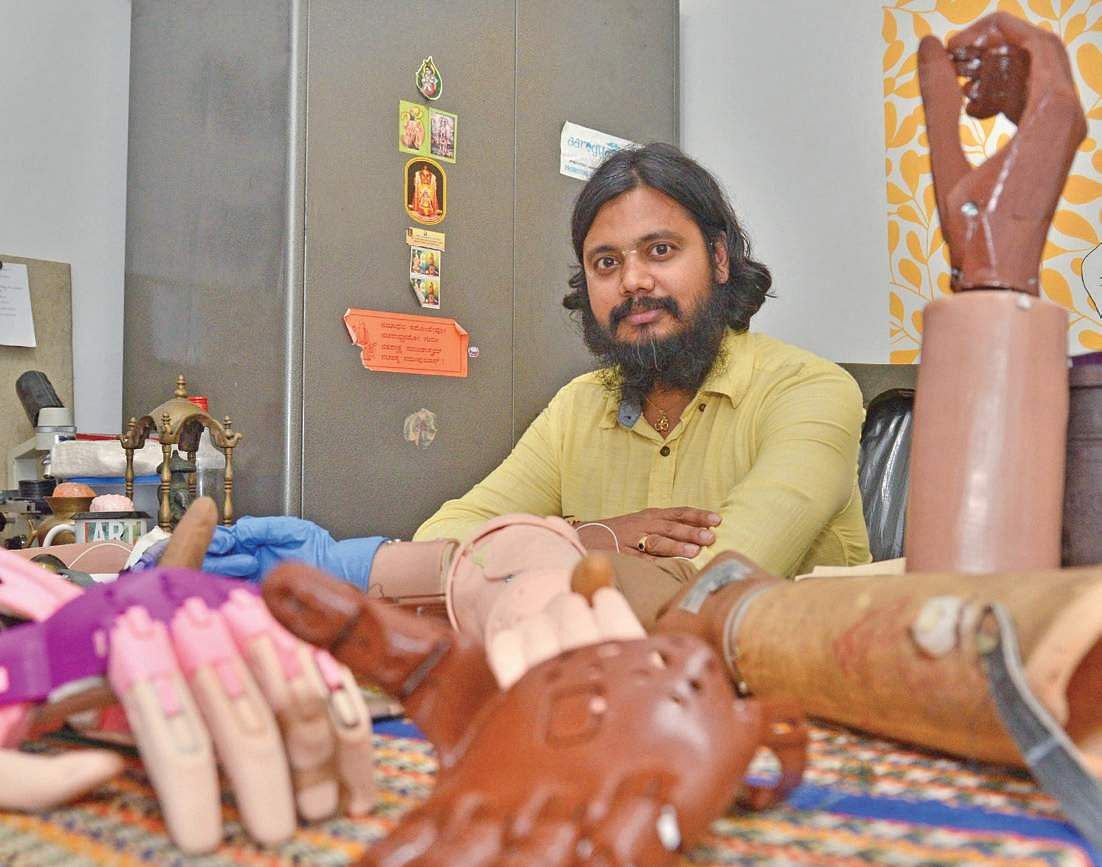 The medical camp was conducted by Aarogya Seva, a Bengaluru-based NGO. Like Ekam, there are at least 400 more people whose lives Aarogya has touched with its latest innovation – 3D upper limb prosthetics. Why only upper limb and why 3D, one may ask. To this, NGO founder and director ​​Dr Dayaprasad G Kulkarni says, “When it comes to leg amputees, Jaipur Foot is popular. But there are few prosthetics available in the market for upper limb, and 3D printed ones were the best and cheapest option. People use 3D printers mostly to make toys. But what use is technology if it does not help people who are in need?”

The project is the brainchild of Daya. While he first conceptualised the project in January 2016,​​ he set up a crowd funding campaign​ ​in August the same year​. ​He started with very little money. Daya approached the Bengaluru office of Stratasys, one of the largest manufacturers of 3D printers, and asked them if they would donate printers for the cause. “They told me that their Hong Kong office has two outdated printers which they want to give away. So I collected some money from my donors and headed to Hong Kong with just two bags and got the printers to Bengaluru,” Daya says.

Aarogya gathers information about people with disabilities through its health camps and Regional Resource Centres, besides collaborating with HOSMAT Hospital and Indian Institute of Science. The prosthetics have been sent out to Bhopal, Jaipur, Assam, Kolkata and as far as Rwanda, Kenya, Cambodia, Vietnam and Syria, among others.

Also, everybody can avail the prosthetics for free. “It does not matter if a person is a millionaire. They can all take it for free. If you give something that people value, they will respect it. This way they might come forward to help us make more such prosthetics and reach out to more people,” the Bengaluru-based doctor says. In fact, Daya doesn’t believe in charging people. He says, “Healthcare is not a commodity to be sold. That is why all our services are free of cost.”

Reaching out to remote areas

Aarogya makes it a point to reach out to people even in the most remote areas. Take Sonu Saini for instance. A native of a remote village in Bihar, he lost his hand in an accident at a paper cutting factory, but thanks to a medical camp in Patna, he met Daya. Sonu’s brother Pankaj Kumar says, “Aarogya sent us the prosthetic through courier. But the hand was a bit tight, so Dr Daya is now sending another one. Had it not been for the camp, my brother would never have had a prosthetic.”

Volunteering is the key

The NGO thrives on micro volunteering. “Our aim is to get more people involved. We have had a few corporate offices send their employees to make prosthetics for us as part of their corporate social responsibility programme. They 3D-printed the parts, assembled them and left a note for the beneficiaries. On receiving the prosthetic, the patient sends a photograph to the volunteer with the hand and the note. This makes people feel that they have made a difference in somebody’s life,” Daya says.

Ilhaan Ashraf agrees. The 22-year-old MBBS student from Bangalore Medical College and Research Institute is a volunteer herself. “The work at Aarogya resonates with what I believe in, which is helping people. I have been volunteering here since January. I help with the prosthetics and other projects every day after college. In fact, some of my friends have also volunteered here,” she says.

Daya has collaborated with New York-based research scientist Jon Schull, who is also the founder of e-NABLE (makers of 3D prosthetics). Schull recently trained a member from Aarogya, Prashanth, for two months in 3D printing. Prashant will now impart training to the other volunteers.

One such person who is keen on helping with the project is Mudit Dandwate. The 26-year-old mechanical engineer and CEO of a start-up lost his left forearm two months ago. It was bitten off by a crocodile in a lake on the outskirts of Bengaluru. Mudit recently made his own 3D prosthetic. “After the accident, I know the value of prosthetics. This is why I came to Aarogya, to see if I can help them with the project,” he says.

There are, however, some shortcomings. One major problem being frequent power cuts. If the 3D printer is almost done printing a finger, after a power cut, it will start printing from scratch again. To prevent this, Daya is now trying to persuade a few big firms to donate a UPS. As for its future plans, the NGO wants to acquire 10 printers and train more people.

How can you help?
Anybody can volunteer at Aarogya. One can start with a workshop – the upcoming one is on September 24. People can also donate spools of PLA (polylactic acid) or ABS (Acrylonitrile butadiene styrene). Both are easily available. Contact: 8320034169
Why 3D printed prosthetics?
A single prosthetic costs `10,000 to `15,000. The ones available in the market are between `2 lakh and `50 lakh
It is sturdy and lightweight
Fairly heat-resistant
Can carry up to 10 pounds of weight
In case of a breakage, the parts can be printed and replaced
Motorised hands are also available
It takes 20 to 30 hours to make one prosthetic