Hosakerehalli flyover inaugurated, but roads in nearby areas pathetic

IT took two years for the Bruhat Bengaluru Mahanagara Palike (BBMP) to complete a 263-metre-long flyover near Hosakerehalli on the Outer Ring Road.

BENGALURU: IT took two years for the Bruhat Bengaluru Mahanagara Palike (BBMP) to complete a 263-metre-long flyover near Hosakerehalli on the Outer Ring Road. And two months after completion of work, it was inaugurated on Saturday. Reason: The service roads next to it were not repaired. Again, though Chief Minister Siddaramaiah was supposed to throw open the flyover to the public, he didn’t, and Bengaluru Development Minister K J George inaugurated it.

The flyover, built under the CM’s Nagarottana Programme, is one of the five flyovers which are part of the signal-free corridor from Mysore Road junction to Central Silk Board junction along the Outer Ring Road. As the CM was supposed to throw the flyover open to public, BBMP engineers quickly repaired the service roads that were damaged due to the flyover construction work and also rains. However, roads adjacent to the flyover and in the surrounding areas continue to be in a pathetic state.

The flyover between PESIT and KEB junction, is expected to reduce travel time as it helps avoid two traffic signals. However, it may not help motorists who have to take the pathetic side roads. “I come to drop my son at Little Flower Public School on ORR at Hosakerehalli. The nearest option from Mysuru Road is the service road of the Outer Ring Road. There are small sheds near PESIT, and the road too is in a sorry state,” said Ravishankar, who frequents that stretch. In the last two to three days, they have repaired the service road.

A senior BBMP official admits that the service road next to flyover was in a bad condition. Even the Outer Ring Road from where the flyover starts was damaged due to heavy rains. “Our engineers repaired it in the last couple of days. Chief Minister Siddaramaiah was supposed to inaugurate it. We did not want to take any chance, so we repaired it,’’ he said. The flyover has a service road on either side -- one side of the road connects to Girinagar, Banashankari Stage II while the other connects to Hosakerehalli, Dattatreyanagar and Ittamadu. The 80 feet road in Girinagar (near NCERT), which is hardly 500 metres from the flyover, too is damaged.

“It has been more than nine months since they dug up the road. The road has not been repaired since then,” said Madan, a tailor. Dattatreyanagar in Banashankari Stage II has narrow lanes. “The roads here are 20 feet to 25 feet wide and have huge potholes, posing a risk to motorists. It is difficult to drive, especially when it rains, as potholes turn into small pools,’’ said Srinivas M K, resident of Hosakerehalli. Mayor G Padmavathi said: “I am aware of the potholes on the interior roads. If we ask engineers to repair them, major road section officials and ward engineers point fingers at each other. I have no choice but to bring it to BBMP Commissioner’s notice,’’ she said. 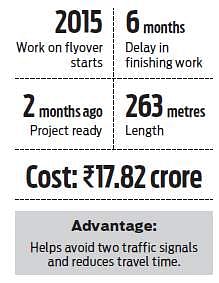 Roads to be asphalted in four months: George

Bengaluru: Bengaluru Development Minister K J George said it would take about three to four months to asphalt all the roads damaged due to rains. “We are filling up potholes, but that is only a temporary arrangement as we can’t take up asphalting due to rains. Once the rains stop, we will start asphalting of roads. Some roads are going to be white topped and some will be re-laid under TenderSure. The asphalting will take three to four months to complete. Work orders have already been issued for asphalting,” he said. Speaking about Indira Canteens, George said a joint commissioner would be appointed to oversee the works on the canteens alone. He also said there were no problems related to Indira Canteens, but some people were obstructing the work.