A senior officer from the Special Investigation Team (SIT) said that they are probing seven angles to find the motive behind Gauri’s murder and that many people have been questioned.

BENGALURU: Premalatha Diwakar, a singer who had accused Raghaveshwara Swamiji of Ramachadrapura mutt of sexual assault, has approached SIT officials probing Gauri Lankesh’s murder, alleging that the seer’s followers may have targetted the scribe as she had published articles against the swamiji when the Diwakar family had filed a case against the seer in 2014. 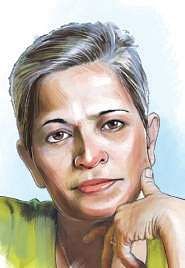 A senior officer from the Special Investigation Team (SIT) said that they are probing seven angles to find the motive behind Gauri’s murder and that many people have been questioned. The officer added that Premalatha has provided documents related to Gauri’s articles against the seer.

“We are also probing this angle. Based on the complaint, we may question some people once we find evidence,” the officer said. Ramachandra Ajjakana, a spokesperson of the mutt told Express that they have not received any summons or notice from the SIT. “We learnt that the Diwakar family have approached SIT officials. It clearly shows that the family is frustrated over the previous case and now they are diverting the probe by complaining against Swamiji.

The mutt never gets involved in such cases and always fights legally if anyone tries to damage the swamiji’s dignity or image.’’ Meanwhile, SIT officials on Friday questioned Vikram Sampath, an author, as part of the ongoing investigation and recorded his statement. A team questioned the author at his residence as Gauri had published an article criticising him two years ago. A source said that Vikram’s parents informed BJP leader Malavika Avinash, who is a family friend, as they were worried about the SIT visit.