What if animals hunted us down, asks artist in latest series

Ever wondered what would happen if animals treated us the way we treat them, if they lived our lives and went shopping carrying a 'Free Tibet' bag or played electric guitar with hooves? Abhimanyu Ghim

BENGALURU: Ever wondered what would happen if animals treated us the way we treat them, if they lived our lives and went shopping carrying a 'Free Tibet' bag or played electric guitar with hooves? Abhimanyu Ghimiray, a city-based artist tries to  explore the dynamics of animal-human behaviour in his upcoming exhibition titled Animals.The artist will be displaying 15 artworks featuring different animals including pigs and fox striking human poses and actions. In one his work, he shows a crocodile poaching a human. "For me, it is mainly about animals and their instinct within us. Through my art, I am mainly focusing on how we treat them," he adds. 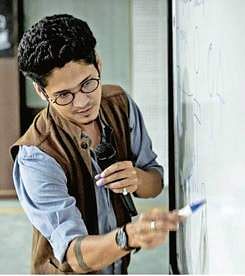 Abhimanyu has used several mediums for this collection including Sumi Japanese brush, ink on papers, watercolours and acrylic paint. The artist, who originally hails from Darjeeling and was brought up in Delhi had his first art debut in Bengaluru in August 2015. The title of his first exhibition was “On-The-Go Mundane Encapsulation” that was a satirical take on Bengaluru's chaotic movement. "I like to capture mundane things around my surroundings and life. As an artist, I would want them to see the unnoticeable things... stuff that we avoid thinking about," he shares.

But journey of this 33-year-old artist has not been easy. "I had to be my own art manager, which somewhere drains your creativity too," he sighs. For this particular exhibition, he took about a month's time to perpare his artwork and submit them to the gallery. He adores Michelangelo, an Italian artist and follows the belief "work hard on hard work".

Abhimanyu also participates in live art events. On July 20 this year, he participated in an event 'Fight With Art' organised by the Gorkhalis in the city against the unrest in the Darjeeling Hills. "I completed my art in less than three hours and received immense appreciation from the audience," he says. He has done about 10 live art events. "I think it is a completely different experience for the viewer as well as the artist," he says adding,  "I receive immediate feedback from the audience which can be unnerving as well as exciting." He also says that live art can inspire the audience.The exhibition ‘Animals’ will be on from September 29 at at DYU Art Cafe Koramangala.