Masti Venkatesh Iyengar’s 102-year-old home is where politicians and literrateurs used to meet; Today it houses a trust that honours his works and life

BENGALURU: The writings of Masti Venkatesh Iyengar, who was honoured with Jnanapith Award – the highest literary award of the country – were inspired by locations around his house such as Harihara Gudda, Hanumanagiri, Bugle Rock Park and the verdant fields. In those days, Gavipuram extension in south West Bengaluru was still sparsely populated.According to a journal Masti and Masti Memorial Organisations by historian Suresh Moona, there were 15 houses in Gavipuram Extension, between the Ramakrishna Math and the famous Bull Temple. When Iyengar, ‘Father of Kannada Short Stories’, was transferred to Bengaluru to work at the Secretariat in the early 1900s, he rented a room in the residence of Sri Nagappa,  who he knew.

In the same lane, there was another house being constructed by a person named Sri Krishnamurthy. Almost three quarters of the construction was completed when Nagappa told Masti that the builder wanted to sell the incomplete house for `7,300 and suggested that he buy the property. Masti borrowed money and built the rest of the structure and left a compound around it. Dr V Vasantasree, the oldest grand daughter of Masti, says, “When he bought the house, there was only a hall and verandah. He extended the house and built more rooms including a kitchen.” On the first floor is his study room. “The family would gather regularly at the house and about 10 to 12 children would sit on floor to have food together,” she adds.

In his biography Bhava published in three volumes, he writes: “There is a belief that homes are blessed and give happy life to its residents. By God’s grace, it has been so for me. When my family grew larger and the space became inadequate, I extended the house. I live happily and content in my house.”
Masti held several meetings with writers at his house, known as ‘Anubhava Mantapa’, the Abode of Experience. The first floor of the house hosted literary activities such as seminars, discussions, poet’s meet and plays. The journal states that striding from one end of the hall to the other, he would dictate his work and his wife Pankajamma would scribe them. A verandah outside the hall stands witness to visits by many dignitaries from the arts and literary fields and also by VIPs from political circles.

Suresh Moona says that this is the only heritage structure on that road that represents the culture of Bengaluru; it is one of the few structures with traditional architecture remaining in Basavanagudi. “Earlier, the houses were constructed in large sites. The house would be in the centre of the site with lot of trees and space around. Made with Madras terrace roof, it helps to keep the house cool with lot of scope for ventilation and sunlight,” he adds. Dr Vasantasree says that the house was renovated twice but still holds the old world charm. “We tried to make the roof water proof but it did not work. So we had to replace it with steel roofing.” 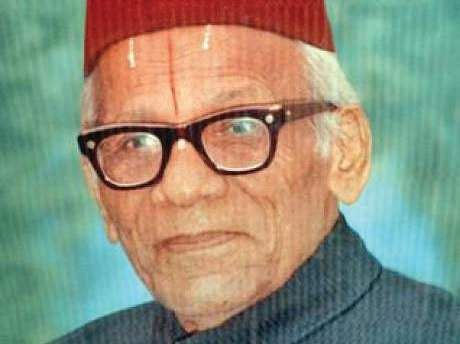 The family now runs a trust called Masti Venkatesh Iyengar Jeevana Karyalaya Trust at the 102-year-old house of the litterateur. To keeps his legacy alive, the trust publishes his work and holds endowment programmes every June 6 on his birth anniversary.Also the founder trustee of the trust, she says, “There’re book halls, archives and library that houses the Masti’s books that won him awards and the books he bought from the prize money he received from college competitions. The library is however, not open to public.”

Suresh says Masti was a popular figure in this residential area and would mingle with all people. “It was common to see  him walking near Gandhi Bazaar and Ramakrishna Math. People felt honoured to have seen him and talked to him,” he says.Masti, who would write under the pen name Srinivasa, was Seenappa by his mother, Seenanna by his close relatives, Muthanna by grand children and chocolate tatha by other children.

Masti came as a student to city

Masti was born in his grandfather’s house on June 6, 1891 at Hogenahalli, a hamlet near Masti Village of Malur taluk in Kolar district. His association with Bengaluru began when he came to the city for higher studies after completing his Fine Arts in 1909. He joined Central College to do his BA. He stayed along with four other students at Munsif Varadaraja Iyengar’s house in Chamarajpet. Later, he passed the Civil Service Exam. He was recruited by Mysore government and sent to Bangalore District Office for training.