Man who mowed down three nabbed in Bengaluru

BENGALURU: The Madiwala Traffic police on Thursday arrested truck driver Ashok who had rammed a two-wheeler killing three of a family on Hosur Road near St John Hospital. He had abandoned the vehicle and fled after the accident. 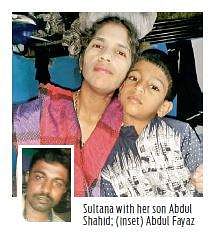 On Wednesday night, Abdul Fayaz (33), his wife Sultana (28), and their 7-year-old son Abdul Shahid were kno​​cked by the speeding truck when they were on their way to Madiwala. Shahid was studying in Class 2 in a private school and Fayaz was a small-time businessman at the Sunday Bazaar on BVK Iyengar road.
Police approched the truck owner who revealed the identity of the driver Ashok, a native of Kolar. Ashok resides at Lingarajpuram and was hiding at a relative’s house in RT Nagar from where he was nabbed.

During interrogation, he revealed that he lost control over the vehicle while overtaking the scooter. He was subjected to a medical test and doctors ruled that he was not under the influence of alcohol at the time of the accident.

The couple, residents of Sriramapura, had left their four-year-old daughter with Sultana’s mother four days ago and they were on their way to bring her back when the speeding truck knocked them down.