Bengaluru: Soon, you can get a haircut at a Metro station nearby and board a train

One thinks of a Metro station as a place full of people in a hurry to get to work or school. So, the idea of getting a haircut or a relaxing foot massage inside a Metro station may seem odd to many. H

BENGALURU: One thinks of a Metro station as a place full of people in a hurry to get to work or school. So, the idea of getting a haircut or a relaxing foot massage inside a Metro station may seem odd to many. However, this could soon become a reality as the Bangalore Metro Rail Corporation Ltd (BMRCL) has for the first time decided to permit top-end salons to set up shop at five stations. 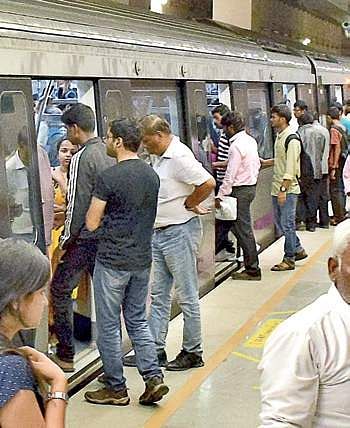 U A Vasanth Rao told Express, “We are permitting it for the first time due to repeated requests of late from people running beauty salons. The heavy daily footfalls has made them sense a huge business opportunity here.” With jampacked trains carrying an average of 3.5 lakh commuters during workdays and three lakh during weekends, there is definitely a commercial potential in the stations, he added.

Tenders have also been called for fitness centres, tattoo studios, call centres and BPOs among other businesses for the first time. The deadline for submissions of tender documents by bidders is October 12.  The retail space available in each station ranges from 68 sqft (M G Road) to 3,400 sqft (Mahalakshmi Layout).

On the rental rates, Rao said, “It is on par with market rates.” Asked about the response for two new ventures initiated earlier – like Incubation Centres and day care centres for kids, he said, “The creche facility did not take off due to too many safety regulations that need to be in place.” There is good response for business incubation centres,” he added.

When BMRCL initially opened up its stations for retail centres, business was dull and many outlets wound up later. “There is very good response now and we are looking at boosting our non-fare revenue in a big way,” he added. It may be noted that salons are a common feature in Metro stations internationally.

The latest tender calling for retail outlets at its stations lists beauty salons to be set up at the following stations on the East-West Line: Baiyyappanahalli, Indira Nagar, Trinity, M G Road, Mantri Sampige Square Road.