People from far and near came for charity tokens

The lure of free rations given as charity by a city -based individual, who claims to be a businessman, has been drawing people from far and near over the last few years.

BENGALURU: The lure of free rations given as charity by a city -based individual, who claims to be a businessman, has been drawing people from far and near over the last few years. People had started gathering from Wednesday night to collect the tokens for the rations which are given out ahead of Ramzan. Many did not even mind forgoing their meals and slept overnight in a vacant site in the hope of getting those tokens.

People had come by buses, autos and even their own vehicles from Andhra Pradesh, Krishnagiri, Mulbagal, Kolar, Chikkaballapur, Sidlaghatta, Doddabasthi, Hosur, Attibele, Nelamangala, and also from Lingarajapuram, DJ Halli, Shivajinagar, Byatarayanapura, Kengeri and other areas in the city. Among the dejected crowd was Akbar Mohammed Basha, who hails from Andhra Pradesh and is currently residing in Madiwala. On Thursday, he went to a hospital for dialysis as he was suffering from kidney problems. “Around 11.30am, the dialysis was completed and I came directly to Mittaganahalli on my two-wheeler to collect the token.

I had come to the same place a few months ago, but did not get. This time too, I did not get the coupon due to the commotion.” “I did not know about the deaths of two people which had occurred before I reached the venue. I spent `200 on fuel to come here. Why they are not issuing tokens to others who came yesterday? I can wait for a day if they assure me that tokens will be issued,’’ Basha added. Shabana and Faridha, who had come all the way from Kanakapura, said, “We carried with us documents like Aadhaar card, passport-size photos and phone numbers to register for the tokens. We came to know about the token distribution from some people of our community. 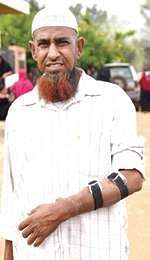 We have no clue about the donor. ‘’ Sumeer, a local, said that three months ago, he had seen more than 1,000 people standing in front of the gates of Jewel Garden Hall to collect coupons. “Some people even collected provisions here. But this time, the crowd was too big. The hall and the huge premises belongs to Sathanur Venkatesh, a landlord. One Raju Mohammed had taken the hall on rent and the businessman Syed Asif had organised distribution of tokens here.’’

Autorickshaw drivers made a killing on Thursday with more than 200 vehicles plying to Mittaganahalli from different parts of the city. Salman, an auto driver said, “I picked up more than 30 people from Shivajinagar. I charged `60 per person and made about seven trips. More than 20 people sustained minor injuries when police resorted to mild lathicharge and some women fell on bushes as they were not able to run.”