BENGALURU: The city experienced a thunderstorm for about half an hour, accompanied by strong winds and hailstones on Monday evening. The short spell of rain threw traffic out of gear across the city, uprooted at least 11 trees, and caused power cuts in many areas.

As per the data obtained from Google Maps, traffic jams occurred at Marathahalli, HSR Layout, Jayanagar, Bannerghatta Road, Whitefield, Old Airport Road and parts of Outer Ring Road.
BESCOM received a total of 1,066 complaints from across the city in just three hours, between 4 pm and 7 pm. By 7 pm, they had attended to 251 of them. BESCOM also got reports of 11 trees being uprooted across the city. One of them fell on an electric pole in Koramangala 2nd block and and broke it.
According to Karnataka State Natural Disaster Monitoring Centre’s (KSNDMC) website, Bengaluru Urban district received rainfall in the range of 0 to 33 mm, with an average of 4.34 mm.

As of 8.30 pm on Monday, the maximum and minimum temperatures over the last 24 hours were 33.5 and 23.1 degrees. As per KSNDMC director, Dr G S Srinivasa Reddy, the thundershowers tallied with the earlier prediction, and similar conditions may persist till April 9.

“On Tuesday and Wednesday, isolated and scattered rainfall is predicted over South Interior Karnataka. After April 7, coastal parts of the state and Malnad could also get rainfall,” he said.The India Meteorological Department (IMD) released a circular which forecasts thunderstorms accompanied by gusty winds at isolated places over several districts including Bengaluru Rural and Bengaluru Urban on Tuesday and Wednesday.

The other districts are Chitradurga, Chikkaballapura, Chikkamagaluru, Chamarajanagara, Hassan, Kolar, Kodagu, Mandya, Mysuru, Ramanagara and Tumakuru districts of South Interior Karnataka. The reason for the rainfall is a wind-discontinuity or trough formed in the atmosphere extending from Odisha to Tamil Nadu and passing over Karnataka, Reddy said.Tamil Nadu, too, is getting good rainfall for the same reason, he said. He added that hailstones were expected and such pre-monsoon showers were often accompanied by them. 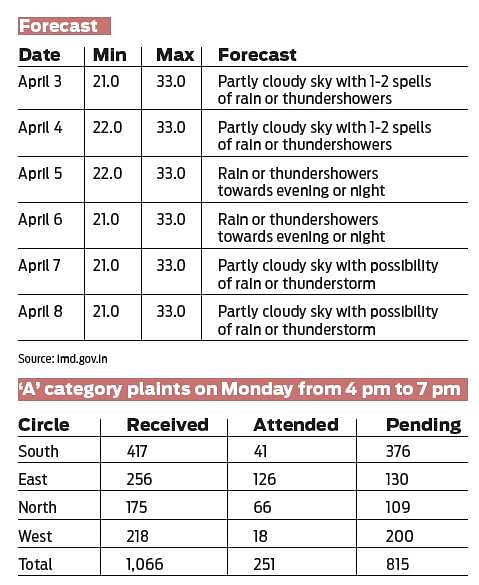 Stay up to date on all the latest Bengaluru news with The New Indian Express App. Download now
(Get the news that matters from New Indian Express on WhatsApp. Click this link and hit 'Click to Subscribe'. Follow the instructions after that.)
TAGS
thunderstorm hailstones bengaluru