Members of the Bengaluru team that excelled at the National Sports Climbing Competiton for the visually-impaired, take a lot of inspiration from their coach, Mohammed Niyamath.

BENGALURU: Members of the Bengaluru team that excelled at the National Sports Climbing Competiton for the visually-impaired, take a lot of inspiration from their coach, Mohammed Niyamath.
Struck by polio since birth on his right leg, Niyamath soldiered on and took to climbing back in 1992. Since then, he has gone on to participate as well as win many national and international competitions, and regularly goes on climbing expeditions.He won a gold medal at the National Paraclimbing Competition held in the city in 2013. In 2014 and 2015, he participated in the Paraclimbing Cup held in France, and came in sixth and fifth recently. 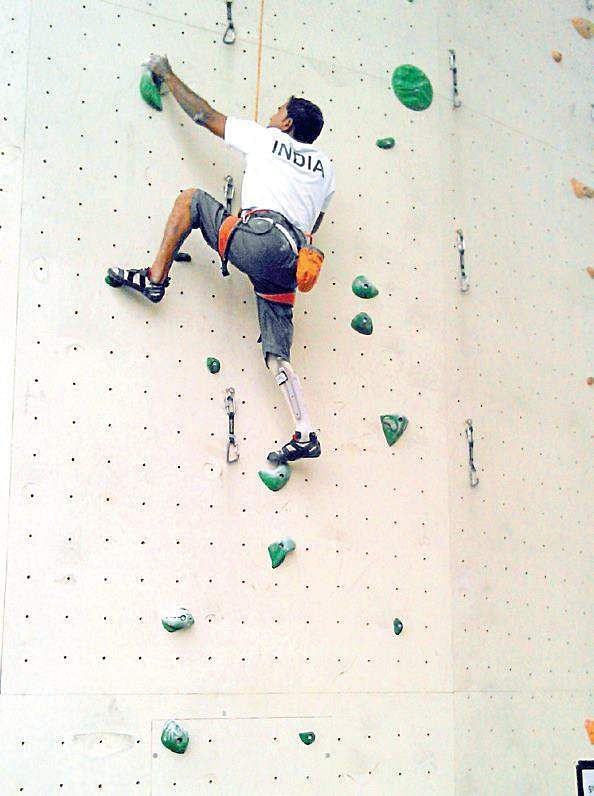 “If I remember correctly, I was the fifth ranked paraclimber in the world according to the International Federation for Sports Climbing or IFSC for the year 2015,” says Niyamath.When many would find it hard to climb a simple wall with two good legs, CE asked him how he manages at such as an arduous sport with his disability. He says, “I mainly use my upper body and my left leg. It was quite difficult at first, however, now I have gotten used to it. It requires a lot of stamina.”

When Niyamath told his family that he wanted to get into climbing, his parents were thoroughly disappointed. “There was not much in terms of support from my family,” he says.In terms of money too, there are quite a few expenses and para-climbing is not sufficient to earn a livelihood. “Just the shoes for the sport costs around `11,000  and they get damaged almost every month,” says Niyamath.

He was on a break for the last two years and was working as an electrician. However, his passion for climbing got the better of him. He now works as a climbing instructor at a climbing institute in the city, and continues to inspire people.

Stay up to date on all the latest Bengaluru news with The New Indian Express App. Download now
(Get the news that matters from New Indian Express on WhatsApp. Click this link and hit 'Click to Subscribe'. Follow the instructions after that.)
TAGS
Bengaluru National Sports Climbing Competiton visually-impaired