In a bid to maximise its revenue collection in the light of increased target for the upcoming financial year, Bruhat Bengaluru Mahanagara Palike’s revenue department on Monday announced some measures.

BENGALURU: In a bid to maximise its revenue collection in the light of increased target for the upcoming financial year, Bruhat Bengaluru Mahanagara Palike’s revenue department on Monday announced some measures.

These include provisions for citizens to make changes in usage of properties (rent to ownership and vice versa) and no extension of the 5% rebate period beyond April 30. The BBMP has announced a property tax target of Rs 3,300 crore for the 2018-19 financial year, with Rs 2,600 to be collected as taxes and the rest as cess. 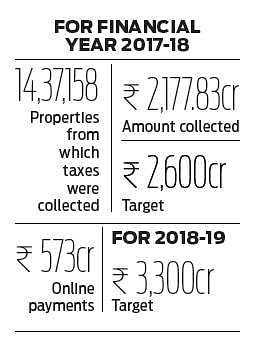 Joint Commissioner (Revenue) M Venkatachalapathy said, “Even though extensions on the 5% rebate period have been done during the previous years, this time no extension will be made beyond April 30.” For citizens to make changes to their property use, the department has introduced Form 5 and Form 6, he said. He added that whoever made incorrect declarations of their properties will be fined double the tax along with the interest.

The BBMP has fallen well short of its targeted collections this time. The target for the year 2017-18 was Rs 2,600 crore, of which Rs 2,177.83 crore has been collected till now. Venkatachalapathy said the reason for the shortage was the fact that not all properties had been brought under the tax net. “A total of 23 lakh properties exist as per a census, and we have mapped 18 lakh of them. So there are more properties we can include,” he said.

He said the process would be aided once Akrama-Sakrama was passed.He said as revenue officials will be busy with election work till the completion of elections, citizens could pay taxes online or at all branches of four banks - Canara, HDFC, Axis and ICICI. “At a meeting held on Saturday, we have passed specific instructions to banks to have a separate counter for property tax payment and to assign one nodal officer to oversee the process,” he said.

Stay up to date on all the latest Bengaluru news with The New Indian Express App. Download now
(Get the news that matters from New Indian Express on WhatsApp. Click this link and hit 'Click to Subscribe'. Follow the instructions after that.)
TAGS
revenue Bruhat Bengaluru Mahanagara Palike Property tax