A women-centric play that goes beyond cliché

Sambandagala Sutta, a directorial debut for Sindhu Hegde, is a play of and about women and relationships.

BENGALURU: Bengaluru-based theatre company, WeMove Theatre, is bringing its 14th production on stage, called Sambanndhagala Sutta. The play is adapted to Kannada from a Croatian play titled All About Women.

Sambandhagala Sutta gives a sneak peak into the lives of different women, each in different stages of their lives. 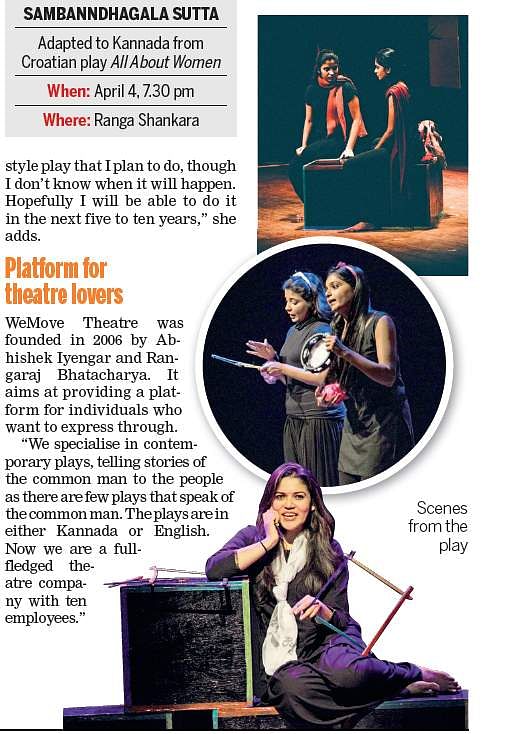 Three actors play the characters of 15 women. Each of these characters, explores the complexities of relationships that each woman faces.

Sindhu Hegde, director of the play says, “It’s about everyday relations and looks at the dynamics and life of people in them.”

Co- founder of WeMove Theatre and production head of the play, Abhishek Iyengar, says, “What is most beautiful about the play is that three actors in the play portray 15 different women. All the narratives are based on the relationship each of these characters have with each other and the effect of societal expectations on them,” further adding, “The narratives seek to explore sisterhood, motherhood, and friendship.”

Sindhu Hegde is doing a course from Ranga Shankara, a residential programme for young directors, where people from all over India and abroad teach direction to aspiring directors.

“I had to direct a play to finish that workshop. One of the instructors suggested this play. I looked it up and liked it a lot. This is nothing like the typical women oriented play or cinema that we have seen. This doesn’t have any propaganda or any agenda,” says the director.

Sindhu has been into theatre since childhood and this is her first attempt at directing.
“This experience has taught me a lot about myself and has also had an impact on my personal growth. I aspire to take directing forward. I have written a small summary of a Broadway style play that I plan to do, though I don’t know when it will happen. Hopefully I will be able to do it in the next five to ten years,” she adds.

WeMove Theatre was founded in 2006 by Abhishek Iyengar and Rangaraj Bhatacharya. It aims at providing a platform for individuals who want to express through.

“We specialise in contemporary plays, telling stories of the common man to the people as there are few plays that speak of the common man. The plays are in either Kannada or English. Now we are a full-fledged theatre company with ten employees.”

Stay up to date on all the latest Bengaluru news with The New Indian Express App. Download now
(Get the news that matters from New Indian Express on WhatsApp. Click this link and hit 'Click to Subscribe'. Follow the instructions after that.)
TAGS
theatre Sambanndhagala Sutta All About Women